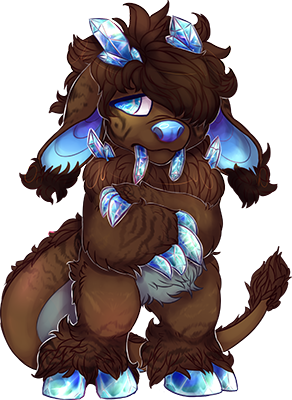 Edgar no longer has a house! They will be unable to work. Please replace the house or move Edgar into a FC slot.

Edgar was foolish to trust someone else meddling with magic. He had only wanted to look different, only wanted to be noticed. He should have studied the potions himself and waited but instead, he asked for help. The witch gave him a potion, and now he's certain to get noticed. Hooves, a strange tail and an infestation of crystals were not what he had hoped for. She refused to fix his new form, and regular potions didn't seem to help.

Desperate to change back Edgar began to study under a tailor who had some knowledge of alchemy. In exchange, he crafts a few of the more complex pieces the tailor requires. Edgar is the best alchemist the kingdom has seen in years. He's is convinced that he'll find a cure for his condition before the crystals take over completely. He's already so cold, all the time. He doesn't have much longer.