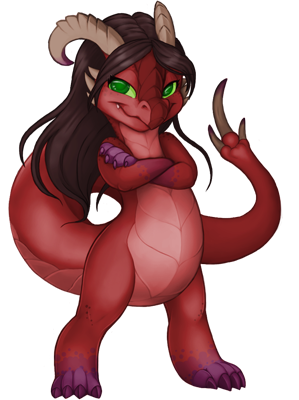 Standing at roughly 13 feet tall, Cherynoble is a wingless, brute wyvern with flowing, dark brown hair and green eyes. Dark red plates are located along her forehead, as well as matching dark red freckles along her face. Cherynoble sports two purple-tipped horns at the top of her head, along with a tail that’s twice the length of her body. Her unusually long tail has three spikes at the very end, tipped the same color of purple at the tips of her horns. The incredibly sharp spikes are known to be semi-prehensile; thus, they’re able grasp onto stabbed prey fairly easily. This wyvern’s rather chubby figure is colored ruby red - along with a pale red underbelly - contrasting with her hands, claws, and feet, which are stained dark purple. Unlike other wyverns, Cherynoble was not raised by her own kind; instead, two female gryphons cared for her during her younger years; this causes her to feel immense pride for her wyvern heritage, ensuring that she makes it known. Though, many who confuse her with a true dragon unintentionally offend her as a result. Due to her pride as a whole, Cherynoble finds herself flaunting about her heritage here and there when she gets the chance, with little to no regret whatsoever, seeing as she finds nothing wrong with praising her origins. But, it’s not only her heritage that she takes pride on; Cherynoble praises her chubby, and what others describe as a fat form, especially at her arms, legs, and belly. A variety of creatures take pleasure in hoarding valuables; but Cherynoble is pleased with hoarding her own mass compared to sparkling coins or jewels. She bears an immense love of food, often going out of her way to seek new delicacies to try and satisfy her refined taste, thus adding on to her body’s existing, hefty weight. While other wyverns would eat just about anything, Cherynoble seeks out the finest of meals for herself, unwilling to tarnish what many describe as her sophisticated palette when it comes to new food. The more she eats, the more she adds on to her weight - not that she cares, however. Criticisms about her fat body go in one ear and out the other; if others dislike her body type, so be it - Cherynoble takes pride in her figure, and that’s mostly all that matters to her regarding it. Her love for exquisite food is not only linked to her wyvern heritage, but also caused by her two gryphon mothers, who treated her to their fine cooking as she grew up in their care. This led to Cherynoble developing her refined taste in meals, making the most of and savoring anything new she can sink her teeth into, instead of scarfing it all down carelessly. Like only a few creatures, including wyverns like her, Cherynoble possesses unique abilities; she’s able to spit molten saliva, able to ignite flammables and burn at around 600°F. However, unlike what others mistake it as, Cherynoble cannot breathe fire. This wyvern’s horn, claw, and tail tips can inject an incredibly strong neurotoxin that has the ability to paralyze helpless prey. Her affinity for bodily toxins leads to a high tolerance for them, rather than an immunity. Cherynoble is also homoromantic and pansexual; meaning she can be attracted to other genders, however any emotional attractions that she develops are only towards females, or those who align as feminine individuals.