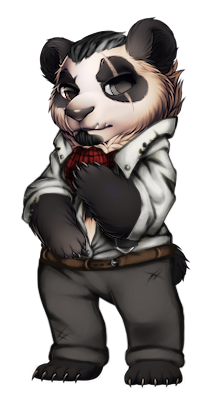 "The world breaks everyone, and afterward, some are strong at the broken places."
-Ernest Hemingway

Isak spent most of his young life in an orphanage, bouncing from foster home to foster home in between. It seemed his would-be parents always quickly lost interest in him, so they would send him right back where he came from. The first few times, it broke his heart. However, it quickly became expected.

He was unwanted, that much was clear. And truly, the panda had no desire to be wanted, just respected. Warmth and love didn't get anyone ahead in life, but things like quick wits and brute force did. And so brute force became Isak's focus. He trained his body, always working on building his strength and his wits in the heat of battle. It was around that time, surely, that he got into a number of bloody fights at the orphanage.

A number of harsh disciplinary actions caused Isak to flee from the orphanage. He took to the streets, finding a friend in a clever rat with business sense and street smarts alike. But he was frail, couldn't rightly defend himself. But that's something Isak could do. And so he became Baldor's defender when they were still young, and became his bodyguard and right-hand man when the rat rose in the underworld as a mob boss.

In the underworld, Isak is well-known for his brutality and mercilessness. It is often said that one knows he is in trouble beyond repair when Baldor leaves a poor, backstabbing fool alone in a room with Isak.