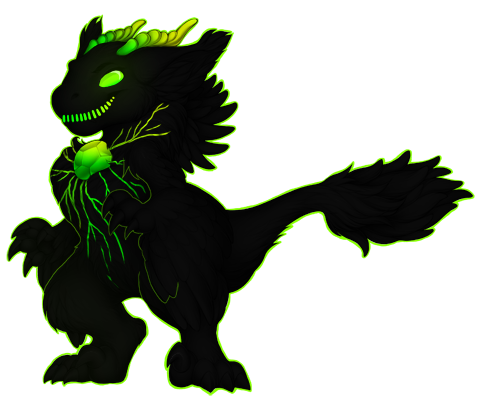 Whoa, whoa – I'm radioactive, radioactive
Whoa, whoa – I'm radioactive, radioactive"
-Radioactive by Imagine Dragons
General Information
Salazar, also ironically referred to as 5a1azar due to his past contact with Area 51, is a sharp robotics engineer with an affinity for hacking. His body now possesses odd radioactive signatures which give him unusual abilities, most notably the ability to give cognition to machines. Due to his somewhat recent change in form, the raptor mostly keeps to himself. It....really is wise not to stand too close. Radioactive signatures and all that, after all.

History
Formerly an overzealous hacker and engineer with a need to constantly push his boundaries, Salazar wasn't known for keeping his head down. If there was something claimed to be uncrackable or unbuildable, one could assume Salazar would always rise to the challenge. Likewise, it should surprise no one that the raptor eventually found himself attempting to infiltrate Area 51. Was there other life among them? Salazar had to know for sure. It was the ultimate definition of "impossible". The very thing that he lived for.

Accessing the place from afar would be impossible. Salazar would have to physically sneak in, using his hacking skills along the way to reduce the chances of detection. And, with only a few minor hiccups along the way, Salazar was "in".

What he found there....admittedly, he's still working through it all in his mind even years later. Certainly, there was other life out there, alien life. But really, all of that was far less shocking than the disturbing physical transformations he was met with. Exactly how he came to be a nearly shapeless radioactive mass was far beyond him. There are....gaps in his memory that, no matter how hard he tries, simply cannot be explained.

Stranger yet, though, is the peculiar talent his new, radioactive body has provided him. With a little concentration and a momentary physical touch, he can breath life into machines. They learn, unlike even the most advanced AI programs would allow. And truly, they seem to feel real emotions.

Even after a vast number of tests the raptor has run upon himself, he still can't understand it all. That, in and of itself, is frustrating. However, with a whole host of living, thinking machines at his disposal, surely he will be able to uncover whatever secrets lie beneath the surface.