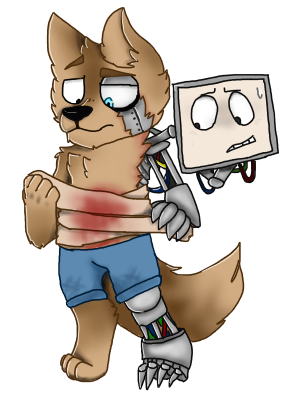 (You play a tape)
This is Klein, the main part of this body... I am... *HAVE*... I have been working on many things that will help people, and sadly failed... so.... that's why I've became a doctor! So I have the recipes for the things I'm making, but don't worry I'm currently making two robots, hopefully the A.I. will be alright, I based their blueprints off of Kyle here... so far I'm running out of steel. Will update these notes later. *end of tap 02* (you noticed tape one is unable to be played due to terrible burns and melting.)

*Tape three plays*
So the first robot is almost finished, Nikki has grown fond of him, I was thinking about giving him to her as a surprise but Kyle thinks that would be terrible and I should at least get to understand his A.I. properly, but so far he seems harmless! *we need to buy more steel* welp that's it for that, upload more notes later...
*end of tape 03*

*tape four plays*
I'm going to start labeling these because I almost destroyed like three logs that I recorded so I can try to find what I did wrong for my other robots, yeah.... I just finished the first robot and Nikki LOVES him, she said she'll name him when she finds a name that suits him the most. Kyle thinks that the robot would probably break, hopefully he's wrong.
*end of tape 04*

*tape six plays*
I have almost finished my second robot, just had to fix up some replies, but Nikki came back with "Friendly" (the name she came up with), with a big rip in his torso. She claims she has done that because he's been spying on her, saying it was my fault. I didn't even know that Friendly was capable of recording, the camera was to be able to detect objects, how did this even happen? Well, I guess I have to set aside the other robot, maybe the robot could help me fix Friendly?
*end of tape 06*

*tape nine plays*
Friendly has finally passed his last test, i fixed his AI and his camera, hopefully he's better now. Also Kyle has named the second robot Askie, and he has been a lot of help, but I have found a lot of unusual patterns in his responds. I'll probably have to fix more problems then I thought.
*end of tape 09*

*tape ten plays*
Friendly has been showing a lot of... odd emotions and actions. His AI seemed to have picked up, odd and strange reactions. The closest thing I could get to his behavior is either being very interested or in "love" with Askie, which is odd since I didn't even know robots could feel love. Friendly has been seen following, talking with, and trying to impress Askie. I'll have to fix that as that might distract them from their jobs.
*end of tape 10*