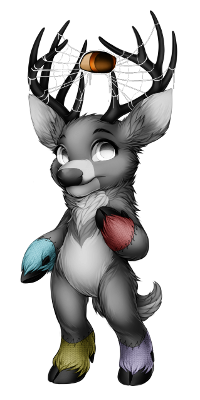 Effigy is infected with Lycanthropy. Changes into a beastly monster after exposure to moonlight or especially frustrating board games. Howling at the moon relieves the symptoms for a little while, but use a Golden Apple for best results.

Effigy is one of the top doctors when it comes to curing the plights of Quetzal Palace, though he isn't as popular due to his personality.
Cold, crude, and brief. He tends to look down on most other villagers.

He is blind in both his 'normal' eyes however the eye between his antlers gives him more then enough sight. 20/20 infact, besides the lack of depth perception (which explains his habit of bumping into desks, chairs, and the like) he gets along rather well.

With the help of his pet he spends all day making potions and cures, he is never short of work to do.

Rumors are that each one of his hooves is taken from another deer doctor and he got their talents after he replaced his hooves with their own. Others say he used to be as bright as a rainbow but an illness he couldn't even cure robbed him of all colour except on the hooves he had removed and stitched back on once it had passed. Effigy doesn't have time to prove them wrong or right.

The eye on the other matter? Well...you didn't hear this from me...but I heard he made a deal with a demon for it.