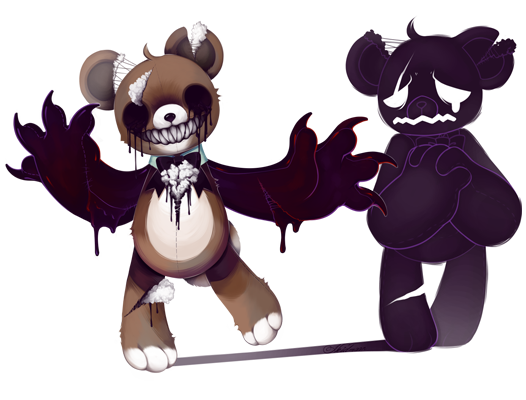 A senior employee of Belphegor's carnival, Needle is a tricksy little bear who enjoy playing pranks on people. The small teddybear and her sentient shadow, named Thread, secured a job at the carnival by continually pranking and spooking the carnival staff and visitors over the course of a month. Initially, Needle hid herself among the gaming booth prizes, pretending to be a stuffed toy until she was handed to someone. When she could no longer get away with her disguise, she relied on Thread to cause mischief around the carnival grounds, further pranking the carnival goers and staff members. When Belphegor finally caught and confronted Needle about her tricks, she smooth talked her way into employment, daring the ringmaster to let her re-open the haunted house and operate it for a week. If she failed to scare anyone, she would leave willingly. If she succeeded, she wanted a steady job at the carnival. After careful consideration, Bel agreed to her terms, intrigued. It didn’t take her long to get the Haunted House back in working order, and within three days, she had successfully terrified over 50% of the carnival staff, including the ringmaster’s best friend. Belphegor was impressed, and honored the agreement to let her work at the carnival without waiting the full week.

She now operates the Haunted House with pride, using her spectra powers to their fullest to give the carnival goers the fright of their life. Though Thread is technically Needle’s shadow, he is sentient and can think and act of his own accord. The only thing he cannot do is separate himself from Needle. While Needle adores horror and macabre things, Thread prefers nicer and more comforting things. He doesn’t share in her enthusiasm for scaring people senseless, but helps her out none the less when it is required of him. Sometimes he will try to comfort the visitors during their experience, but only ends up scaring them worse which Needle finds absolutely hilarious.

The teddybear and her shadow are capable of talking at the same time, and both have the ability to speak with a singular voice as well as multiple voices at the same time, giving the illusion of many people talking in unison. With the help of her spectra abilities, Needle can also manipulate her and Thread’s voices to change pitch, tone, and even distort their voices through a glitchy static effect. Their voices are childlike, Needle’s voice has a more forward and almost playfully mocking tone while Thread’s voice sounds more nervous and scared. Thread stutters while he speaks.

Spectrels are a closed species created by AshenSpectre on DeviantArt.
You may not make your own without permission.