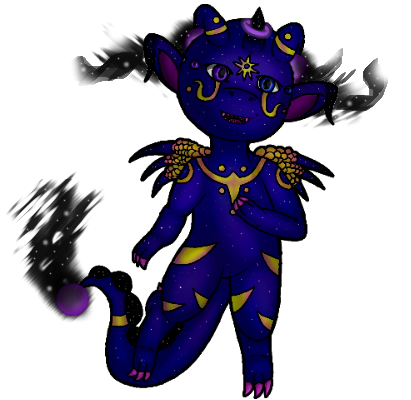 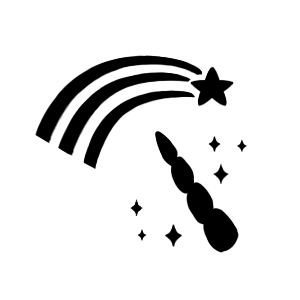 Saturn is infected with Glitterosclerosis. Their glittering horn fills their mind with thoughts of sweets, joy, joyness, and liopleurodons. If you get tired of rainbows and magical adventures on bridges, eating a Golden Apple will crumble the horn.

Name: Saturn
Age: Unknown to herself (around 25 if you must know)
Species: Kalikaio
Gender: Female
Relationship:Flirain
Height: 3' 11"
Companion: Lunashine
Home Planet: Kalzinara
First death cause: Killed in space
Gained incarnate ability:
-Warp portals to travel the universe with ease.
-Can not die in space excluding from black holes, asteroids, ect.
-Basically "breathes" in space without oxygen. No one is sure how that works entirely.
-Flying.

Negatives:
-The "stars" on her body cause a glow and make her more noticeable to predators.
-The black mist that comes from her orbs can obstruct her or others vision if she moves around too fast. (Can also be useful at times)
-Her extra 4 eyes are useless and mostly blinded, causing her main vision to blur at random.
-She has lost her memories upon changing form, though she's the first to lose them from this. She has no idea who she used to be due to this.

Fun fact, she's the only Kalikaio with actual toes.
That totally wasn't an art mistake that I made canon idk what you mean.

Saturn is usually cheerful and overly friendly, but if she dislikes you for any reason or you upset her she will make odd insults towards the other. Things like "your head looks like a coconut" or something silly. However, if she REALLY hates you she won't be as silly, she'll be a total jerk and a polar opposite of how she usually acts. But it takes a lot for her to really hate someone, she would rather be friends than hate. And despite how innocent she can seem, she's really not at all. She can get pretty inappropriate with what she says at the most awkward moments.

She creates orbs that when touched make your body appear as space itself. Letting go makes the effect wear off. The orbs don't work on herself due to her body already being part of space in a sense. She considers the orbs valuable due to how difficult they are to create, however they are truly useless and the true value questionable.

Despite her small size, she knows how to fight quite well, even taking out creatures much large when needed- Or at least giving them a sharp stunning hit to escape. Her friendliness has gotten her attacked by not so nice creatures which is why she learned to fight over time.

Saturn isn't her real name, but since she doesn't remember her name she just went with it. The idea for her name was when another alien told her that her halo reminded them of the rings of Saturn. So she simply replied with "Then I am Saturn".