Bergamot is infected with Vampirism. Symptoms include craving blood, sensitivity to sunlight, an allergy to garlic, and changing into a bat after especially forceful sneezes. If they start to sparkle, immediately consume a Golden Apple to cure the infection. 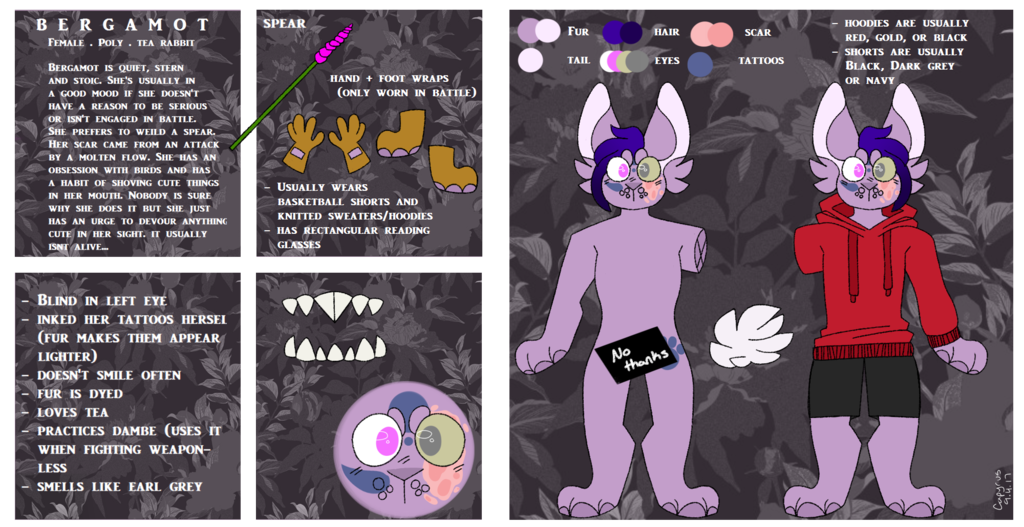 Bergamot is a serious and stern individual who's trained most of her life to be the best warrior she can be. She was blinded in her eye by an attack from a Molten Floe, and hs since relied more on hearing than sight to fight her enemies. It still adversely affected her however, as she cannot properly see her girlfriend anymore.

When I first made her character she was originally going to be a member of an all girl's band consisting of three bunnies, so there are two other bunny characters I'll eventually upload that are linked to her.

She smells strongly of bergamot tea, and it's natural, hence her name. She's a big fan of goth and metal music, and she can play drums, bass, and can sing. She has a pretty tight schedule in her life so if she has time to spare you better not waste it. She has a pet crow named Alucard and she has a strange obsession with birds.

One more odd thing about her. Whenever she sees something cute, for absolutely no discernible reason she has the intense urge to stuff it into her mouth. She doesn't wanna eat it, per se, she just wants to have it in her mouth. Thankfully she has a large mouth, and she never tries to actually eat the object or creature in question so it usually just ends up getting horribly shocked and then spat out when someone notices. She has absolutely no idea why this happens but she gives into it a lot, so keep a close eye on her when she sees something she deems cute. She'll usually try to deny she's done it, out of self-conscious embarrassment more than out of dishonesty, but it's pretty hard to deny something when your moth is full...