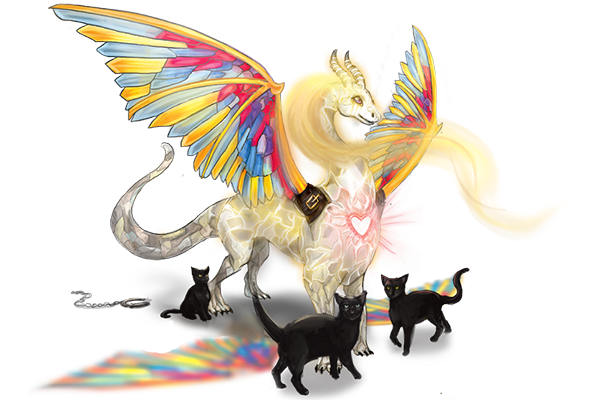 Ki Kou is infected with Zombipathy. Eating brains relieves symptoms for a time, but comes with memories of the brain's former life. Your doctor recommends adding hot sauce for extra flavor, but a Golden Apple a day will send the Zombipathy away.

Art by the talented Acrid

~*~ Her Story ~*~
She was born into a loving family. Her parents worked hard to give her everything they could. But even with the best of intentions, sometimes things go wrong.

When she was very little, she was sick. She needed to see a healer, but there were other things that had to be done first. She was left in the care of one her parents though trustworthy, a teacher. But instead of learning the joy of life, instead of understanding, she suffered abuse and humiliation. Her parents worked hard, once they knew, to correct the harm that had been done, but scars remained. And she was tarnished by a lack of belief in herself. The illness was healed, but it left behind the memory of being different and unworthy.

As she grew she was able to put away the darkness of her past, to flourish and grow. She was kept safe, if perhaps a bit restricted. But her life was good and she still had hope and dreams and a bright innocence.

Then there came an injury. And it rocked her world. For some time she could not walk, and the first injury lead to another. But she found a healer and again was able to move forward in her life, if with some pain. But only a few years later, she was again injured where the healing hadn't been complete. And so she was again confined to immobility, for longer this time to ensure healing. But still a pain remained. And in that time of hurt and immobility, the lessons of the past, of the one who should have been a teacher, were remembered and crept deeper into her soul. And even when she could again move, the pain and the fear of being further injured, left her hobbled.

But she was strong, she resolved not to dwell but to move forward. But there were scars upon her heart and upon her body. And she found herself alone. For so long she was alone, though those around her had found love and happiness. And she began to believe that she was truly as she had been told, without worth.

Then came one who was a friend, and friendship became love. But that one was slowly twisted by darkness. And he ate at her soul, chaining her body and ripping away her wings. He would possess her. And because she did not believe in herself, she did not struggle. She accepted his words of scorn, did not rail against the confinement, but offered only her heart which was taken and trampled.

But she stayed, knowing that no other would have her, even if such knowledge was false. And she spoke for her love even against her parents, who loved and wept for her and the darkness she was in. And she hid the scars and herself away in his shadow.

But the evil which had twisted her love was seen by others, by those who would stop evil. They did not know her, were not there to save her, only to stop him. And they did, waking her from her sleep in the cocoon he had made for her, ripping her out and showing her the stark reality of her world. Then they took him, the one she had let shape her into his perfect pet, and she was alone.

She was shattered. Her world finally torn apart beyond her understanding or ability to cope.

Her parents pulled her back to them, working to strengthen and assure her. And she found comfort in the warmth of the cats who accepted and loved her, not seeing the rawness that she had become.

It took a long time and much pain to begin seeing herself again. To begin seeing the world and her potential. The pieces of her life, of herself, were scattered at her feet. The wounds of the past and the present open to the world. And her soul exposed.

But she gained strength and was again shown hope. And she knew it was up to her to decide her future. She could wallow in her pain, she could hate the world, or perhaps just males, she could let herself continue to believe that she had no value and curl up waiting for death. Or she could choose to rebuild, to move forward, to become again something of worth, to herself and the world.

So she picked up the pieces and started rebuilding her life. She put herself back together. And though she could not make herself as she had been before, she could choose not to be daunted, not to let that stop her. She would never fly again, but she would have beautiful wings. She didn't have all the pieces, but she would replace them as she built herself up anew. She had lost her innocence, but she refused to lose her hope.

And so her soul shone through to light the shadows she had been hiding in. She stood, not heeding the pain, and moved forward once again.

~*~ Defining Quote ~*~
Picking up the pieces and re-building yourself can be a tricky experience. The pieces never seem to fit quite right into the old spaces. It's a breath of fresh air to realise they don't have to, you can create something different out of the pieces, something better. You will never go back to being exactly who you were, but you can be someone wiser and stronger. ~~ DestinyBlue