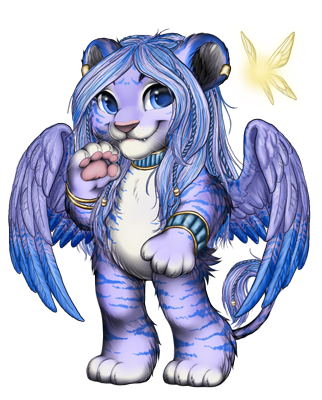 "Of course it's fun to watch the little faeries frolic and play, but don't upset them or you'll have me to deal with."
~ Asthertet

Family
Parents: TaRepy and Crumpitt (not on PI, or my character)
Siblings: Suinaia (an adopted sister, not my character)
Status: dating
Boyfriend: Wod'jss
Offspring: none

Powers: hopping between the earthly realm and the faerie realm, seeing through faerie glamours

Asthertet is a faerie knightess at heart. She loves exploring, questing and adventures along with all of the excitement that brings. Although prone to being flighty and whimsical she is oddly dependable and somewhat level-headed.. especially in comparison to many of the fey creatures she spends time with.
This faerie feline considers herself the protector of the fey, especially the smaller ones who could use the help of a tiger-sized creature. She's surprisingly gentle with her paws when dealing with the little folk.
When she is in a playful mood Asthertet will frequently hide from her friends to pounce on them at unexpected times. Her other favourite freetime passtime is flying, she adores her wings and loves to take to the skies and feel the updrafts beneath her.

Dislikes: Those who harm creatures smaller and weaker then them, Evil Fey 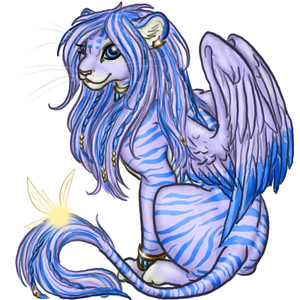