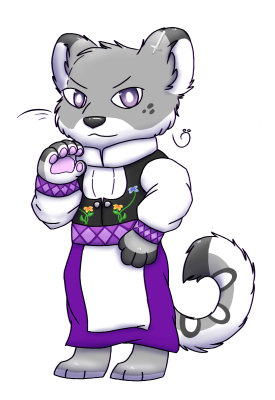 Kjetil Bondevik
Serious and reserved, Kjetil is a short-tempered tailor who loves his career. His family describes him as a lovable and hard-working snow leopard who has a hard time expressing his feelings and is painfully shy. Despite his stoic demeanor, he cares deeply for everyone around him and would do anything for their sakes. His elder sister, Silje, often teases him for being too hardworking, as he frequently works later than necessary sewing clothes for all of his family.

Although he is not very skilled at it, Kjetil is fascinated by magic. In his house, he has a large collection of spellbooks, runestones, and various other objects related to thaumaturgy tucked away in his workroom. He hopes to one day encounter and befriend a mythical creature.

• Kjetil has a thick Norwegian accent when he speaks, making it difficult for those unfamiliar to understand him at first.
• He is very fond of cute and pretty things.
• He has several pets, and has named them all after types of trees.