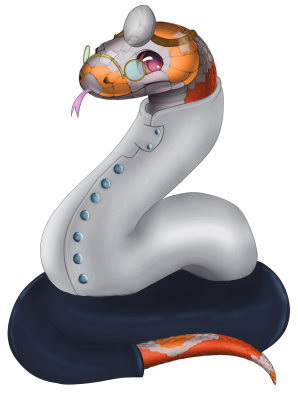 Dr, Noodle is infected with Vampirism. Symptoms include craving blood, sensitivity to sunlight, an allergy to garlic, and changing into a bat after especially forceful sneezes. If they start to sparkle, immediately consume a Golden Apple to cure the infection.

~A good caring noodle that only wants to help others~

Dr. Noodle had originally planed on only spending a short time in DragonsMaw Manor before moving on to other villages.
By now he was set on the idea of living and being alone, and felt somewhat lonely about it, but he was determined to master all medicines to help as many villagers as he could.
While on his travels he stopped for a rest in the village of DragonsMaw for a short break.
While exploring the shops he noticed a sign for logging and followed it. When he arrived at the strange toothy home he noticed there were some rodent villagers living there and assumed they'd want him to leave.
To his surprise though an odd looking mouse, which he later realized was a Mystic mouse, approached him seeming quiet cheerful.
The mouse, named Quent, seemed determined on having Dr. Noodle stay and rest, since the doctor would admit they were tired and didn't know the area well.
Over a few days Dr. Noodle became friends with most of the housemates, including the resident Doctor "Doc".
He was surprised to hear that Doc was hoping he would stay, though he wouldn't give an explanation why.
Quent spoke more with Dr. Noodle and told about their 'family' goal of traveling to other villages so everyone could learn and master the careers of other villages.
Quent wanted to master all plants and told Dr. Noodle if they'd stay he would provide any plants needed.
Dr. Noodle had no way to obtain plants himself, and had admittedly grown attached to the family and agreed to stay.
He is currently learning all DragonsMaw Medicines.