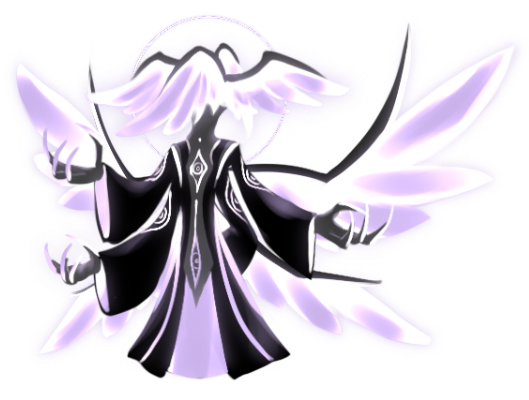 A benevolent entity resulting from the voluntary fusion of Bastiel and Mor, Arkka was a harmonious combination of the two and bore traits from both of his components. He was taller than either of the two individuals, standing 14 feet in height, and while he maintained some of Bast's intimidating aura on the exterior, he encompassed both of his components' personalities on the interior.

He had a very high level of charisma, intelligence, and kindness, but he lacked confidence at times and he was not always the most courageous fusion. He was generally soft-spoken like Mor, but he had an occasional adventurous and fun-loving side that came out thanks to Bast's influence as well, though this side usually only showed itself when he was alone or with trusted company like Lur. Though he gained more power from the fused state, he still took the passive approach of his components and refrained from getting involved in fights and arguments. If he did happen to get involved, he took a neutral stance and rationalized between both parties. That said, he wasn't without a temper of his own, and under very dire circumstances he could lash out viciously.

Being a fusion, he had the combined Ideas and powers of both of his components, but unlike them, he couldn't use both sets of powers as frequently as they did, or he risked destabilization. A fusion is easier to maintain when both parties are willing, as Bast and Mor were, but it still took energy to maintain a fusion for an extended period of time even without using abilities. As such, Arkka tended to be more selective with the use of his abilities, picking and choosing who he would save from death or reincarnate into a new life, but he did still try to help as many souls as he could whenever possible.

Just like all other elements of his existence, Arkka's Abstraction also encompassed elements from both of his components' Abstractions. Unlike others that Arkka knew, he didn't often retreat into his Abstraction unless he was on the verge of destabilization and needed to rest. Instead, he prefered to be out wandering around. When he did need a break, though, he could be found resting by the lake watching the fireflies, or meditating on one of the stone pillars out in the ocean of his Abstraction.