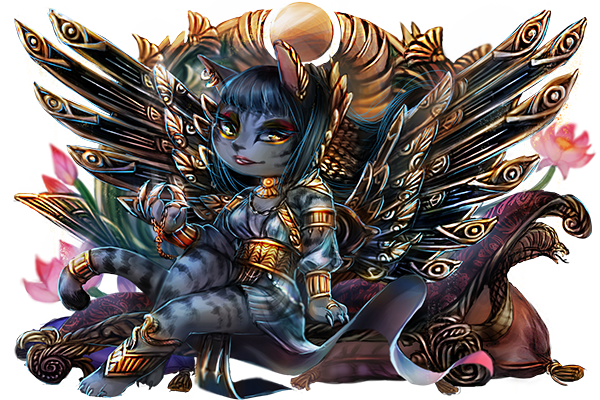 Princess Perfect is infected with Zombipathy. Eating brains relieves symptoms for a time, but comes with memories of the brain's former life. Your doctor recommends adding hot sauce for extra flavor, but a Golden Apple a day will send the Zombipathy away.

Personality: Miss Princess Perfect, the epitome of royalty. Posh, well spoken, bold, and anything but kind. This this feline sits atop her throne with a cruel disposition, and any who oppose her will meet an untimely end with their family never knowing of where they disappeared to. She is a lover of riches, and basks in the gold and turquoise that adorns her luxurious throne. Though her demand for more is unquenchable. Her greed, though, is not just for objects, but for people as well. Like many queens and pharaohs of times past, she too has slaves, but not just any slaves will do. No, the kitty cat that she is, her personal hoard of servants and pyramid makers just so happen to be canid. A cat’s prideful fantasy and she has it, enslaving the dirty, lolely canines of the desert. Despite all of this, she treats her clan well. Bountiful feasts are treated to them, as well as first entrance to the temple of their gods, which she denies the slaves until her clan makes their offerings and prays to their gods.

Biography: A kitten born under the protection of the goddess Bastet, and to the royalty of the pharaoh before her, Princess Ephelele, or Perfect in her native language, was a sight to behold in her kingdom. A rare sight for a cat to be born under the sun, as Bastet originally was, Ephelele was said to be the chosen one of Bastet and that she would protect Egypt. From what, even the shamans didn’t know, but her family, as well as the royal shamans would do everything in their power to prepare her for whatever prophecy was about to come true. However, taking care of a baby came first, and allowing the princess a childhood was something came first. Pharaoh and queen nurtured their only child, giving her only the best toys, blankets, and even well behaved slave children for her to play with. Unlike most within her history, the princess was allowed to grow and be a child.

Upon her thirteenth birthday, her parents, as well as the shamans decided that it was time to train her for her destiny. The gifts they gave her were beautiful adornments of gold and leather armour, a dagar with the glyph of Bastet on the blade and a bow and arrows. Training started almost immediately. The children she played with during her childhood were now her training partners, armed with shields, spears and knives as she was. A warrior, that was what they told her she should be, but her parents saw her hesitation to attack the friends she made with the ferocity they expected out of her. Of course, a loyal child her friends would never try to kill them. Something else must be done. After many moons of consulting with the shamans, the pharaoh and the queen thought it would be best to bring in child warriors from their neighbors across the Nile. The royal guards were sent to get the best fighters from across the river, and brought back a mere total of five children who were able to fight. To the Pharaoh’s dismay, it was soon revealed that these chosen ones were merely called warriors because they could hit each other with sticks and palm fronds and not immediately run crying to mommy. This was a challenge the royals were not looking forward to.

Within the next few years, not only had the royal guards trained Ephelele, but they also took on and trained the children they had acquired from across the river. At seventeen, the princess was excelling at her training. Not only wa she challenging those who had trained with her, but the guards as well. While Bastet smiled upon her, Sekhmet was growing increasingly jealous of the princess, and was brewing a nasty plan. The lion goddess of fire and revenge could not be stopped, not even by the peaceful cat goddess. Sekhmet was rough around the edges, and cursed people arbitrarily, she was not evil in nature. Though her jealousy drove her down a very steep path where even the other gods were questioning as to whether or not she had damned herself. Ephelele gained praise within her kingdom, and even those past it. She held the reputation of a great warrior, and at such a young age such praise was almost unheard of. Pharaoh’s pride for his daughter was unmatched, and on her nineteenth birthday he granted her the title of head of the royal guards. And that was when Sekhmet made a rare earthly appearance. A great white lioness graced the hall that night, her eyes blazing like an eternal flame, yet her gaze was cold as the night sands. She cursed the princess, giving her eternal life, and yet she would never be able to lead her people as she was taught. They would all die by her decisions and she could do nothing about it. She would never marry, have heirs or be able to travel outside of the palace walls. Pharaoh begged Sekhmet to reconsider, but the lioness would have it no other way and left without another word.

Years passed, and the Pharaoh and his queen passed, leaving the throne to the princess. She ruled the best she could, judging everything she did as carefully as she could, but ultimately the curse was something that overcame her every time. After decades of watching her beloved clan fall time and time again, it started to harden her heart. Ephelele made new laws, forbidding her clan to leave the walls of the palace. The slaves were made to work harder, and travel on foot greater distances through the desert to assure that their princess had food enough for everyone. Most never came back, those who did came back in a state of disrepair. Some even went insane and took to the Nile as their only salvation. Princess Ephelele too eventually went mad. Her clan left her, or were killed for questioning her antics. A once proud, strong young cat, now turned into a mad ruler with an empty kingdom in ruin, and no people to look after.
profile character and biography by KilljoyLights