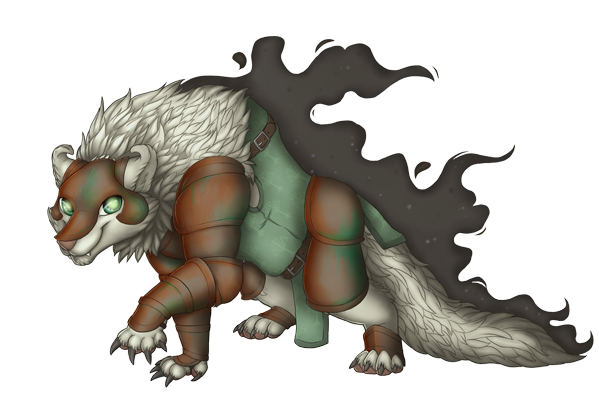 Revenant is infected with Lycanthropy. Changes into a beastly monster after exposure to moonlight or especially frustrating board games. Howling at the moon relieves the symptoms for a little while, but use a Golden Apple for best results.

How long had it been, months, years? What was his quest? He was on a quest, wasn't he? No, there was always the forest, only the forest, nothing but the forest. Intruders? No. All intruders were dealt with. Peace. For how long? Too much thought...too much thought brings pain... Peace for now. Birdsong. Insects. Wind rustling through leaves. The feel of the stone under him. Stone. He always returned here. Why here? NO. Too much. Questions hurt. Rest. Peace.

[The stalwart defender always rested at the foot of the obelisk. All who found him were driven away or killed. None recognized the runes on its surface, but some swore the stone itself glowed. Knight of a forgotten lord, of a forgotten kingdom, of a forgotten era, they said. Ghosts dont run out of breath, pant wearily over the fallen, so what was he? Deep in the forests of Olde Foxbury, still wearing its colors, were they once affiliated? There were always more stories. Always more young ones venturing in on a dare, those who found him resting had a chance to escape, those who found him patrolling? Not a trace was left but hushed stories of those who claimed to have witnessed it. Time passes. Story becomes legend. How long until none believe in him? How long until the magic fades, the obelisk crumbles? None know.]