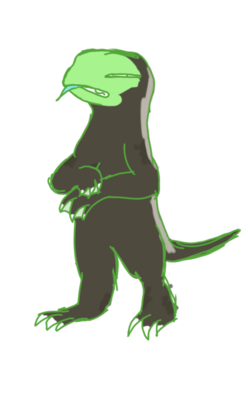 Corinth no longer has a house! They will be unable to work. Please replace the house or move Corinth into a FC slot.

Corinth is an average gecko; at least he used to be. During his first few years of life, he was tricked by a particularly nasty dragon, straight into a radioactive bog. Luckily for Corinth, he survived, but just barely. Even though he is both blind and deaf, Corinth has the uncanny ability of always knowing the layout of his surroundings.

Due to his strange appearance, Corinth is a loner by nature and choice, having abandoned the still loving care of his family. Living in the dark and eerie part of Dragonsmaw forest, Corinth revels in scaring and stealing from unlucky travellers.

The legend goes, if you see Corinth during a full moon, bad luck will follow you for an entire month.