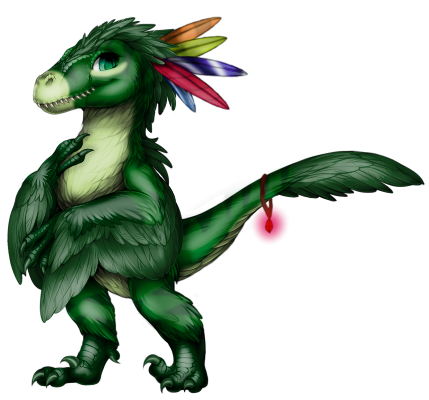 Aivi is infected with Zombipathy. Eating brains relieves symptoms for a time, but comes with memories of the brain's former life. Your doctor recommends adding hot sauce for extra flavor, but a Golden Apple a day will send the Zombipathy away.

Personality ~
Positive traits: Friendly, outgoing, kind, caring, adventurous, daring, brave, valiant, protective, nonjudgmental of others for how they look as she would rather judge another by their character and present actions, despite occasionally looking back at her past and wondering what her mother was like personally, she often lives in the present like any wild animal, wondering what she will eat today or where she will sleep tonight, honest, loyal, trusting after she gets to know you, trustworthy, helpful.

Neutral traits: Cautious upon first meeting someone new, (when roleplaying as feral only) can act a lot like a stray dog or cat, cautious and on guard, ready to defend herself if needed, until the other party proves that are not going to cause any harm to her.

Negative traits: Hot headed, stubborn, often she disregards her own safety over her friends's safety, can be aggressive or defensive if needed, often taking that aggression to defend herself and her friends.

Mental Disorders:
Asperger's Syndrome, ADHD, Bipolar Disorder and CDO (which is OCD or Obsessive compulsive disorder with the letters in alphabetical order as they should be! c:)

Likes: Good dreams (normally about what her mother might have been like personally) making friends, being with friends, drawing, writing, reading, going on adventures, collecting unique colorful feathers & shiny rocks, having a pet to keep her company, hunting for food only (as she really doesn't enjoy taking another's life, but she likes the adrenaline rush that she gets from the hunt) gathering food/berries to eat and having nice, dry and warm place to sleep.

Dislikes: Her nightmares about her mother's death (as she heard it but didn't see it) being rejected, being alone, not going an adventure, someone stealing her collection of feathers & shiny rocks, the thought of her pet running away/dying, having nothing to eat and no shelter from the weather.

History: When she was an egg, her mother was brutally murdered before her father's eyes and he could do nothing to stop it. Because of the guilt that weighed him down, her father had wanted nothing to do with her as she only reminded him of his now deceased mate. So he depressedly had left her (as she was still inside of her egg at this time) for dead. 'Let the scavengers eat her for all that I care!' Her father had thought angrily as he left her for dead. She was on her own when she had hatched soon afterwords and due this, she had ended up raising herself. She learned how to forage and hunt on her own, starting with small leafy plants and small bugs then worked her way up to taller and bigger plants, full of edible berries, (which she learned by watching the small mammals eat for which berries and plants were safe for consumption) and onto hunting small mammals and birds. She eventually got to the largest plants that she could eat and started to hunt other dinosaurs, but her curiosity made her feel bad about killing them and she would only hunt the already fatally wounded (aka were going to die from their wounds anyways) or sick to the point of near death. She is like an angel of death, as she refuses to take anyone but the ones who were already near death. She also scavenges when it is convenient, normally if another predator has just finished eating and they aren't in the mood to fight over the leftovers as they normally don't think it is worth it. Otherwise she'd rather hunt and forage for her own meal.

Diet: Because she was on her own, she has a different diet then other Utahraptors her age. She mostly eats a variety of things, from plants to small mammals as well as medium sized dinosaurs. However if she needs a big meal, she would prefer to scavenge her meal over hunting other dinosaurs as she is more friendly then her counterparts. However she does hunts those who will die from their wounds or sickness for food as she can't always rely on the bigger predators (Yes she is the largest Dromaeosauruidae or the scientific term for the raptor dinosaur but there are larger dinosaurs out there then her, such as Trex) like Trex to share their food with her. In the times of plenty, she eats mostly a mix of plants, berries, nuts and meat. This is the only time that she hunts young other then when they are sick or already fatally wounded. She also scavenges in this time. In the times of few, she hunts the weak, injured and near death, she tries to forage as well, mostly digging up buried nuts and looking for edible plants.

Pet: Triune.
Meaning: Her pet's name, Triune is a noun that means "being three in one" A name most fitting for a miniature black and white, three headed Hydra.

Was created as a Jungle Velociraptor with the career: Explorer.

Career Change log: Changed career to Warrior once for the tutorial when joining, then back to Explorer when I was suggested to start with using both the Explorer career and the Herbalist career by another user after I had just joined here.