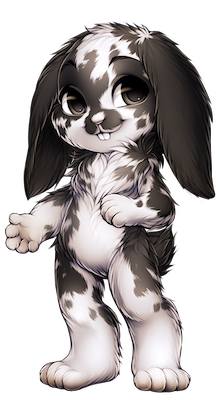 You've heard about an inexperienced cook, so you decide to check things out.
Maybe he's not so bad.... Right?
As you enter his little store, you notice that his fur is a mess. Has he been cooking, or wrestling a bear?
"Oh, uhm.... Hello, there." He brushes his paws over his long ears. "How may I help you?" He smiles and leans over his counter a bit, salt falling out of his fur. "Er... Ignore that."

He isn't a stranger to bribing others with food, and he often does it to Shayne, so that she'll stop trying to sneak into his (much undersized kitchen, to her) to steal essentially anything that she can ingest.

He does allow her to help collect supplies, however, as she can collect far more than him, with her large size and hands.
This doesn't always work out, as Shayne will sometimes eat the supplies before they make it back.

Surprisingly, Gregory isn't entirely bothered by it.
Frustrated, but never quite angry