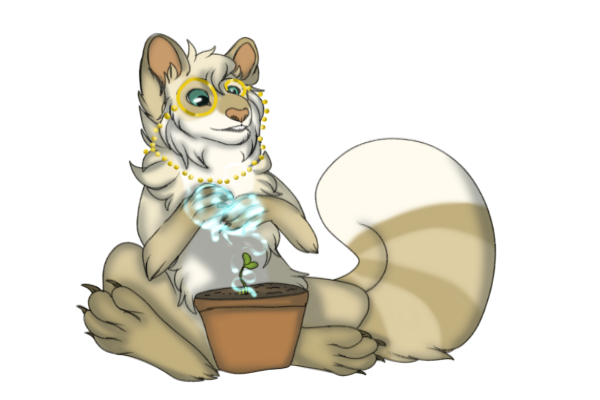 There's a seemingly abandoned part of Olde Foxbury that you enter.
You accidentally step on something soft.
A rather large ferret tail, perhaps?
"Ow! My tail! How rude!" A fuming raccoon turns to face you, drumming one of his feet impatiently.
He then huffs, before sighing, then laughing.
"Hmph. We don't quite have a doctor yet.... So, I'm glad that you only stepped on my tail." He laughs again, reaching a paw out for you to shake "I'm Lucian, you may call me Luce, or Lou, if you wish." He smiles in a sincere way. "It's nice to meet someone different. Who may you be?"
His silky voice catches you off gaurd.
Who IS this guy?

Lucian is a fairly defensive guy, and hates being touched.
He simply doesn't like the idea of someone touching any part of him.
The main reason being, that his fur is tough for him to groom. That's not to say that he is self absorbed, he just does not wish to brush and wash his fur every time that is touched. (Bad idea being a herbalist, eh?)
He's generally nice, and welcoming, so long as you don't touch him without his permission.
(Yes, this includes hugs.)

He may be very shielding when he first meets someone, but he likes to know their personality, before exposing his own too much.

He's not much of a talker, and prefers cloud or star watching, or just a lunch, over talking for hours on end.

He also likes to pick pocket, when the chance is given. Though, he doesn't do that much, anymore.
Akari is breaking him from the habit, and Gregory is helping as well.