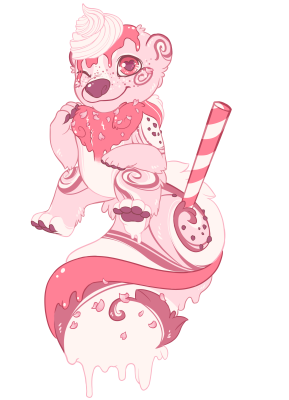 I bubble with love when I think about the witch who made me!
Has the steam clouded your eyes? Life is a miraculous gift.
I feel you have brewed a new potential within me!

One of Professor Hosta's former apprentices was quite the precocious sort. Her incredible sweet tooth tended to get the better of her. No matter what form of guidance he gave her, the incredibly talented little witchling let her desires get the better of her. Her wandering mind always caused her transfiguration spells to go awry. She was meant to transform a teacup into a tea kettle, but instead she turned her latte into a living thing! The Professor was not pleased, and that unruly apprentice was soon cast out for her mischief.

Despite the drama his birth caused, Latte doesn't mind his existence. He's quite happy, actually, and lively. He's currently taken up residence in Parfait's home, assisting the goopy, sweets loving thing with his baking. It makes for quite the charming aesthetic, as well.