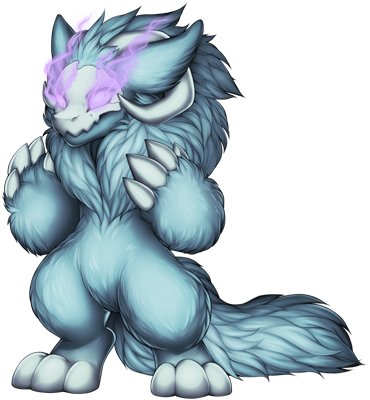 Nak no longer has a house! They will be unable to work. Please replace the house or move Nak into a FC slot.

Name: Nak
Genderless
Species: Bone Fiend
Relationships?? They are good friends with Jester.
Info; This particular little bone fiend is not a true Wickerbeast and merely adopts the form of what they see around them and like the look of, which in this case was a Wickerbeast. Nak is an avid collector of bones, going so far as to adorn their body with them. The most characteristic of these bone adornments is in the form of a skull helmet that conceals their face.
Nak cannot talk in any known language, and instead communicates via a series of chirps, clacks and growls which earned them the name Nak, after the noise produced when asked their name.

It would appear that the obsessive hoarding of bones has had an effect on this strange little fiend...with an interesting glow now streaming from their eyes.

The form seen above is the most minimal of their appearance as they also alter their fur colours with dirt and other such natural dyes.

Bone Fiends like Nak have a reasonable amount of shapeshifting ability to mimic the species in their environment and to fit into the skulls and skeletons they wear. Therefore, around Jester, Nak assumes a more Dragon-like form. Their basal form is unknown but each Bone Fiend has a default form they prefer.