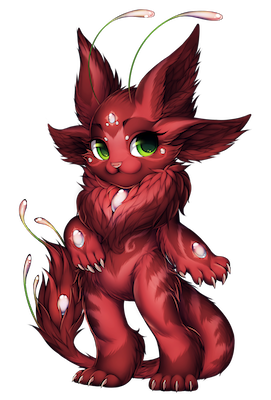 Layla no longer has a house! They will be unable to work. Please replace the house or move Layla into a FC slot.

When Layla was still a raven, she spent her days swooping about the abandoned mines, looking for some item of value to entice her captors that she could pay for her freedom. It was a humiliating life- staying in the dark, dusty caverns like some kind of feathered bat. Until one day, when something pearlescent caught her eye.

She dove down to investigate and found a small stuffed creature, with gems on its whiskers and other areas. Layla attempted to pull them off, but with one touch with her beak she had began to grow larger. She threw it down in a panic, but even her frantic squawking couldn't stop what was happening. Her dark feathers, the color of shiny cooled magma, turned more into a lava color. The raven, now a new animal entirely, had transformed.

What her new life beheld, she didn't care. All she knew was that now she could deceive the evil people who kept her in a cage that she wasn't the raven they expected to see- tired and dirty, ruffled up from flying into the cave walls. Layla could, at last, forget about the stolen shiny items she owed back and start fresh. So she casually, but swiftly, crawled out of the horrid mines where she had for so long wasted her life away.