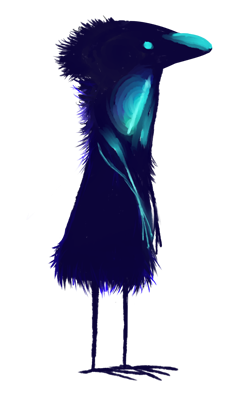 [12.07.19██]
"Whilst walking across the frozen landscape in ███████████, we have encountered a bizarre creature that bears similarities to a penguin. For the time being, we're calling it ███████████. It has the same facial structure and thick brush of feathers, but the body is unlike anything we've ever seen before. It's easy to spot in this barren glacial wasteland, the blue-black plumage a stark contrast to the blinding white snow and ice. But what's really fascinating to me is the luminous blue areas on its body. You can't notice it so much during the day time, but in the night, the creature emits a soft glow. █ ████ ████ ██ ███ ████ █████ ████ ██████ ██ ██ █████ ███ █████ ██████ ██ ████ ████. It doesn't seem to be afraid of us, though I think █████ might be afraid of it. Every time it wanders close to our camp ███ goes and hides. Says that the creature's eyes are unnerving. I guess that's not entirely untrue. At first we thought it was blind but I don't think it is. We see those icy blue orbs observing us, day and night, just staring. I heard ████████ say the other night that he thinks its gaze could freeze the sun if it looked at it long enough. ████ is going to make attempts to interact with it tomorrow or the next day, whenever it next wanders into our camp. We don't know if it's dangerous, but for now we're just labeling it as curious. Let's hope that doesn't change in the near future."

[14.07.19██]
"███████████ wanders around the perimeter of our camp now. It used to come and go, but now it stays close by on a daily basis. ███ and ████ have been trying to lure it closer, but their attempts have been unsuccessful. It doesn't seem interested in anything we offer it. ████ is curious about its biology. Its arms and legs don't seem to have any kind of protection against the cold but ███████████ doesn't seem affected by this. ███ has theorized that ███████████ is made of ice itself, but we don't know if we believe that. The more we observe it, the more it observes us as well. We've started taking turns keeping watch over it as it circles our camp, trying to observe its habits. It does not seem to eat, and it never sleeps or blinks those strange eyes. If not for the footprints in the snow and the occasional shed feather that ██████ has been collecting to study, I dare say I'd even wonder if it really did exist. 12 people couldn't possibly ALL hallucinate the same vision, could they?"

[20.07.19██]
"Attempts to lure ███████████ into the camp have failed, so █████, ████, and ███ attempted a capture. Their attempt was a failure, but ████ did manage to make physical contact with it for a brief moment. He is currently tending to his wounded hand after ███████████ took a good nip at him. Since then, it's been keeping distance between our camp and itself. I guess it doesn't trust us anymore. Did it ever really trust us in the first place? Hard to say. I noticed last night that ███████████ wandered into our camp. As I was checking on some equipment, I saw the blue glow pass by the window of our makeshift shelter building. It looked around for a moment before returning to its usual spot. But instead of making its rounds, it simply stood still and stared off into the distance, its back turned. I put on my winter coat and hat, exiting the shelter. ███████████ turned to look at me as I took my first step through the snow, the glowing blue eye focused on me sending a chill through my very core. I kept still until it turned its attention back to whatever was in the distance, and the proceeded slowly. It didn't move away, and made no signs of aggression, so I sat down next to it, feeling the air grow colder, looking into the distance to see what had captured its interest. Whatever was there, if there was anything there at all, was undetectable to my eyes. We stayed like that for a while, and then ███████████ lost interest in whatever it was looking at and turned its attention to preening itself. I could feel a chill setting into my body, so I stood up and began to walk away. I notice that, the further away I walked, the warmer the air began to feel. It was still cold, grant you, but not quite like it was around the creature. I thought to myself, was I imagining things? So I turned around and walked back over to the creature, noticing the air getting significantly colder as I did. Everyone else is asleep now, so I'll have to tell them this discovery in the morning. I wonder if ████ and the other two noticed this when they tried to capture it."