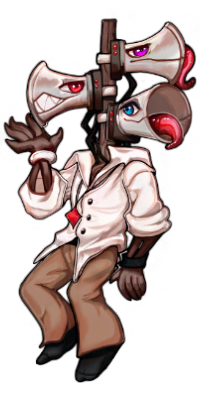 Known as "Three" to Five and Ten, known as "Si" (pronounced "sigh") to his friends and mate.
His actual name, if he has one, is currently not known. 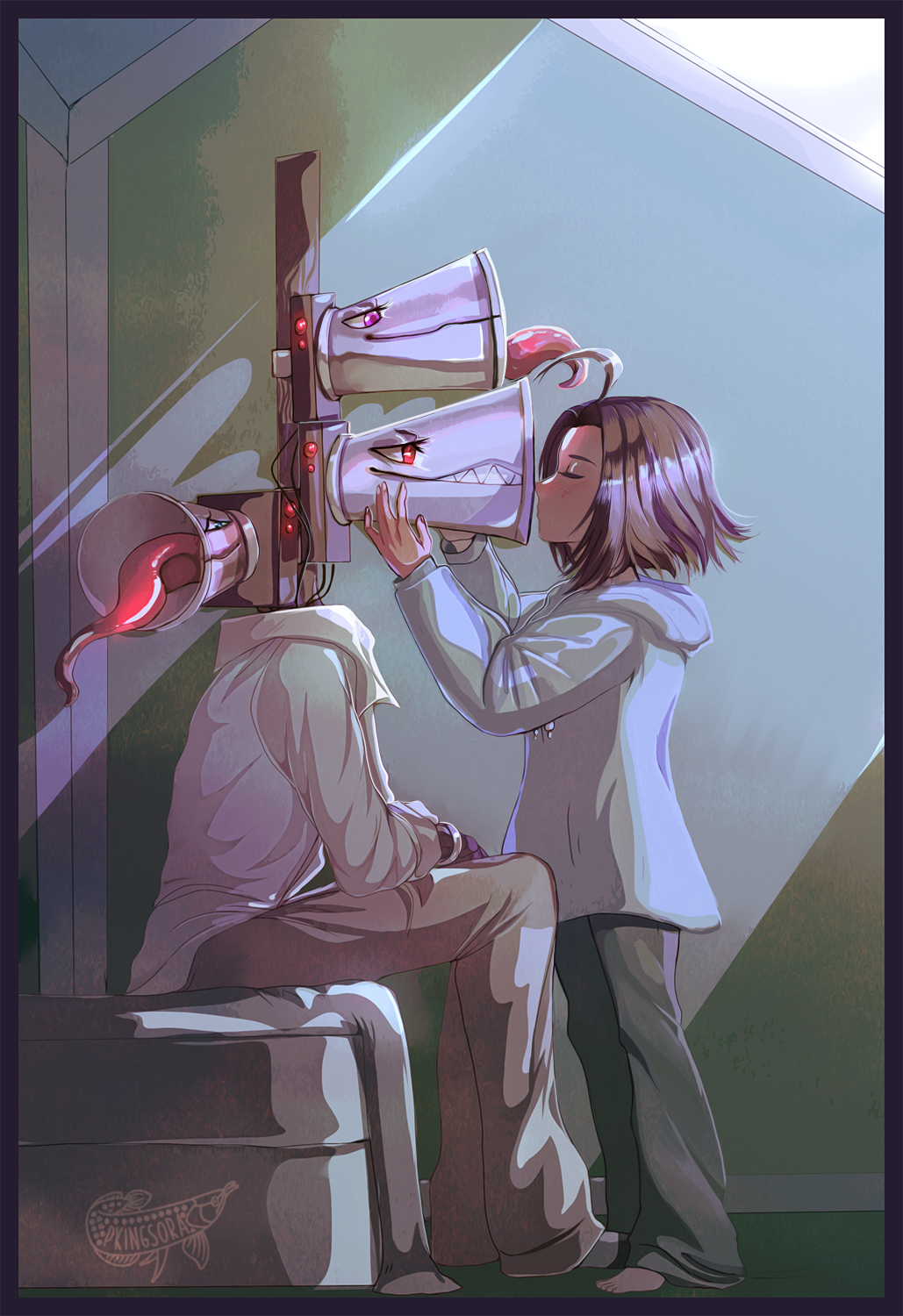 A tri-headed cryptid that resides with his childhood friend and mate in a busy city. He is a type of urban subspecies of Siren Head, and his particular subspecies has adapted over time to human society, blending in better with the humans due to smaller stature and more humanoid features. At present, Si currently lives happily with his mate in a small house in the suburbs, surrounded by a close-knit community of neighbors, and lends his voice to a local cryptid-based radio station a few days a week to make money. While he has mostly converted himself to a human lifestyle, he is still a Siren Head at heart and maintains the notable features and hostile mannerisms of his species. On rare occasions, he's known to revert to his more natural cryptid behavior, hunting and killing humans like his species is known to do.

As mentioned in his introduction, Si is an urban subspecies of Siren Head. There are two particular types that inhabit the city he lives in - the first, typed as “Class I,” are similar to the rural Siren Heads. They are extremely tall with colors more suited to urban environments, and they often disguise themselves as traffic lights, street lamps, and some of the taller or larger entities mimic things like radio or cell phone towers. Si’s subspecies, typed as Class II, are much smaller in size and have more humanoid features. Fully grown, a Class II urban Siren Head may be anywhere between 7 - 10 feet tall depending on the individual. Additionally, Class II siren heads are specifically adapted to fit into human society, so they rely on disguises less often and freely mingle with the people around them instead. Some will even participate in human lifestyles and culture, either to aid their hunting or simply because they enjoy it.

In the early stages of his life, as he researched humans and their lifestyles, Si had experimented with various things and each of his three heads developed a unique personality with different likes or dislikes. Though all three heads are essential to Si’s being, it’s apparent that the middle head is the “main,” and this is the head Si uses the most often to interact with people. When he’s in his more humane state, all three of his heads have an individual conscience and can think or act independently of the others. As such, Si is capable of multi-tasking or learning multiple subjects at the same time, and all information learned by one head is then passed on to the other heads shortly afterward. Additionally, with each head having its own conscience, he can converse with up to two people at the same time, though this is a rare occurrence and seldom happens outside of his circle of friends. Each of his heads has a different voice.

Si works part time at a radio station - three days a week and for eight hours at a time. Due to his popularity in high school because of his voices, and because of what he is, he decided that he wanted to use his voices for more than just hunting and luring people out so he sought out a career path in radio broadcasting. He was able to find employment with a small radio station on Five's territory and works the night shift to fit both his and his mate's schedules. Where other cryptids at the station present with a partner or as a group, Si presents alone thanks to his multiple heads and voices. In between songs and ads that play on the station, Si talks about the day's headlines and events, the weather, and other useful information about the crytpid side of the world.

Though he has comfortably settled into a human lifestyle, Si does revert back to his cryptid lineage from time to time, and there are some aspects of himself that he was never able to change. When Si first came to the city, he was one of many Class II Siren Heads. As they all grew older, each Class II had settled on their own “territory” for hunting and living, and things were proceeding well until some became greedy and sought more. Territorial disputes began to break out, and over time, all but a few Class IIs remained - the others having been driven out of the city or outright killed by their own kind in territorial spats. Presently, Si has a large territory on the East and Northeast side of the city, and he’s formed a peaceful alliance with another Class II referred to as “Five” whose territory borders Si’s on the north end. Outside of the alliance, Si is extremely territorial over his grounds and will instantly turn hostile when another Siren Head enters his territory without his permission.

Inventory:
Garnet Pendant
A simple garnet pendant that was a gift from the human he befriended when they were younger. Garnet is his mate's birthstone, and Si was told that the stone symbolizes friendship and trust. It's part of a matching set, and the other half is worn by his mate. It's not the most expensive or elaborate piece of jewelry, but Si cherishes it greatly, and he only takes it off when he bathes or the pendant needs cleaning.

Cellphone
A modern smart-phone that Si bought to be able to keep in touch with his friends and mate while he's at work or out and about. He mostly uses it to make phone calls or send text messages, but he has a small music library downloaded into it and some apps that he enjoys playing. Occasionally, he'll use it to take pictures which he sometimes uses as wallpapers for his home and lock screens.

Wedding Ring
A simple and plain golden wedding band. Nothing fancy, but it matches the one his mate wears and Si cherishes it just as much as the garnet pendant. Si saved up his work paychecks to buy the matching wedding bands after proposing to his mate.

Assorted Candy
Si always carries around a variety of candy in his pockets. Due to his head structure he can't efficiently chew anything, so he prefers suckers or hard candies that he can hold in his mouth.

Trivia:
• Has a strong fondness for carnivals and amusement parks, acquired from the numerous times he’s gone to them with his mate.
• Has extremely negative feelings and reactions to thunderstorms, doesn’t like being alone during them.
• Is an absolute fiend for candy. Usually seen with the stick of a sucker or lollipop hanging out of the mouth of his middle head.
• Actually really good at cooking and enjoys making meals.

Disclaimer said:
"Siren Head" is a creation by Trevor Henderson (slimyswampghost) on Twitter. Si, while initially based on the original when drawn by the artist (Halo91), is not the canon Siren Head nor an AU of it. I want to make it quite clear that Si is an original character who has very few ties to the original outside of currently borrowing from the idea of being a similar species, and even then they're very different in both design and function. Si does not exist in the Trevor Henderson mythos/universe, nor does the original Siren Head exist in Si's universe.

✮ If you find Si wandering, please return him to Mindscape . ✮