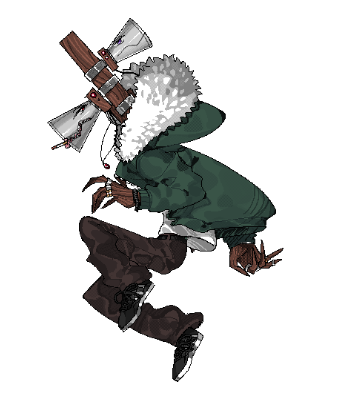 Known as "Three" to Five and Ten, known as "Si" (pronounced "sigh") to his friends and mate.
His actual name, if he has one, is currently not known.

A tri-headed cryptid that resides with his childhood friend and mate in a busy city filled with humans and other variety of creatures. He is an (unofficial) urban subspecies of Siren Head, and his particular subspecies has adapted over time to human society, blending in better with the humans due to smaller stature and more humanoid features. At present, Si currently lives happily with his mate in a small house in the suburbs, surrounded by a close-knit community of neighbors, and lends his voice to a local monster-based radio station a three days a week to make money. While he has mostly converted himself to a human lifestyle and behaves almost entirely like a human, he is still a Siren Head at heart and all of the notable features and hostile mannerisms of his species linger in the back of his mind. On extremely rare occasions, or if someone really works hard to piss him off, he can revert to his more monstrous nature but he has evolved past the need to stalk, hunt, and kill.

At present, Si stands fully grown at 8'5" from the top of his neck to the bottoms of his feet. He's got dark brown skin and a thin body, and he has three heads fastened to his pole-like neck by wide metal bands. Though all three heads are essential to his being, he can remove two of his heads temporarily if needed. However, at least one head needs to be connected at any given time in order for him to survive. When a head is disconnected, it becomes inactive and appears as if its asleep, but it loses all of its senses and will not wake up until it is plugged back into the body. There will also be a gap in the head's memory, but the memories from the other two heads will fill in the missing information once all three heads are functional again.

The order of Si's heads never changes - the purple eyed head is always at the top, the pink eyed head is always in the middle, and the blue eyed head is always the one closest to his shoulders. If one of the heads has to be removed for any reason (routine maintenance, repairing damage, etc.), the heads are always put back in a set order, even if it means removing the other heads to get everything back into place. The base box of each heads is filled with small mechanisms and mechanical parts that allow for tilting up, down, left, and right to give him a wider field of vision. His heads can also swivel almost a full 360º around his neck, and each metal "face" is also capable of rotating 360º, making it easier for him to see something above or below him.

Si’s personality is difficult to summarize as an overall character, because his personality tends to vary based on a number of factors. His current mood, stress levels, the people he’s with - all of these things can affect how he speaks and behaves at any given time. On a normal day, he tends to be a bit cold and stoic externally when he’s around friends, acquaintances, or strangers. He’ll keep a near-constant serious expression on all three heads, which can sometimes be intimidating to people, and he doesn’t outwardly express himself unless to show irritation or hostility. When he’s by himself or in private with his mate, however, the stoic facade drops and his true personality shows through - laughing, smiling, joking around, and being affectionate. Around his mate, specifically, his coldness melts away and his features take on a much softer and kinder appearance. He also has a keen sense of humour, even if he doesn’t show it outwardly. In the rare instances when he’s in a more playful mood, he’ll take on a cocky demeanour and engage in banter with his mate, but it’s all in good fun for both of them and neither one takes it seriously.

As previously mentioned, Si works part time at a radio station - three days a week and for eight hours at a time. Due to his popularity in high school because of his voices, and because of what he is, he decided that he wanted to use his voices for more than just hunting and luring people out so he sought out a career path in radio broadcasting. He was able to find employment with a small radio station on Five's territory and works the night shift to fit both his and his mate's schedules. Where other cryptids at the station present with a partner or a group, Si presents alone thanks to his multiple heads and voices. In between songs and ads that play on the station, Si talks about the day's headlines and events, the weather, and other useful information about the cryptid side of the world. During his work hours, Si reverts back to his natural language instead of speaking English like the humans around him.

It's not uncommon for Si's three heads to bicker among themselves, usually brought on by the heads being too close to each other. While his heads can move freely up and down or around his neck, they are limited to how far they can move based on a couple of factors. Primarily, the base boxes of his heads and the metal bands holding them onto his neck. If at least two of his heads are facing the same direction, the heads may impact if the lower head moves up or the upper head moves down. Similarly, the metal bands will also impact (or pinch his skin) if one head gets too close to the other while facing opposite directions. If two heads are in close proximity with their metal bands, attempting to turn and face the same direction will result in the base boxes impacting on their sides. The heads bickering with each other is commonly seen to occur when Si's in his normal state, where all three heads have individual consciousness.

Abilities & Traits
• Multilingual: Si has a native language of his own, spoken only by sound-based species and object heads similar to himself. It consists of various melodies, tones, mechanical sounds and static, and it ranges in pitch and frequency. In addition to this, Si is fluent in and primarily speaks English. He also knows another language that is incomprehensible to humans, but seems to be universal to all non-humans living within his universe. He shows an interest in other human languages, but so far has not made any attempts to learn one.

• Telepathy: An ability that awakened within Si as he grew older. He became aware of it after he entered high school, when he started hearing the thoughts of those around him in passing, As he matured, it evolved into the ability to not only read minds, but also communicate with others mentally under certain conditions.

• Mimicry, Sound Projection & Audio Manipulation: Si is able to record sounds that he hears in passing and store them within himself for playback or broadcasting at a later time. If he happens to record a person's voice, he can analyze their speaking pattern and then mimic it. Otherwise, he tends to record songs he likes, important news snippets that may be required for his job, and a multitude of other noises and sounds. He is able to manipulate the recorded audio as well to change the sound of it by adding effects, slowing it down or speeding it up, or changing the pitch and tone of it.

• Device Connectivity & Manipulation: He is also able to manipulate electronic devices to a certain extent. He can hook his heads up to various electrical devices with the use of cables and wires for instant access and hijacking, but if he familiarizes himself with someone's device and the frequencies or signals signals it emits, he can crack and manipulate it without having to connect to it. He seldom messes with other people's stuff without a very good reason, though. Most commonly, you'll see him connected to his own cell phone or gaming console so that he can listen to things without disturbing others.

Inventory:
Garnet Pendant
A simple garnet pendant that was a gift from the human he befriended when they were younger. Garnet is his mate's birthstone, and Si was told that the stone symbolizes friendship and trust. It's part of a matching set, and the other half is worn by his mate. It's not the most expensive or elaborate piece of jewelry, but Si cherishes it greatly, and he only takes it off when he bathes or the pendant needs cleaning.

Cellphone
A modern smartphone that Si bought to be able to keep in touch with his friends and mate while he's at work or out and about. He mostly uses it to make phone calls or send text messages, but he has a small music library downloaded into it and some apps that he enjoys playing. Occasionally, he'll use it to take pictures which he sometimes uses as wallpapers for his home and lock screens.

Wedding Ring
A simple and plain golden wedding band. Nothing fancy, but it matches the one his mate wears and Si cherishes it just as much as the garnet pendant. Si saved up his work paychecks to buy the matching wedding bands after proposing to his mate.

Assorted Candy
Si always carries around a variety of candy in his pockets. Due to his head structure he can't efficiently chew anything, so he prefers suckers or hard candies that he can hold in his mouth.

Trivia:
• Has a strong fondness for carnivals and amusement parks, acquired from the numerous times he’s gone to them with his mate.
• Has extremely negative feelings and reactions to thunderstorms, and doesn’t like being alone during them.
• Is an absolute fiend for candy. Usually seen with the stick of a sucker or lollipop hanging out of the mouth of his middle head.
• Is a talented chef and enjoys making meals for himself and his mate.

Disclaimer said:
"Siren Head" is a creation by Trevor Henderson (slimyswampghost) on Twitter. Si, while initially based on the original when drawn by the artist (Halo91), is not the canon Siren Head nor an AU of it. I want to make it quite clear that Si is an original character who has very few ties to the original outside of loosely borrowing from the idea of being a similar species, and even then they're very different in both design and function. Si does not exist in the Trevor Henderson mythos/universe, nor does the original Siren Head exist in Si's universe.

✮ If you find Si wandering, please return him to Moondrops . ✮