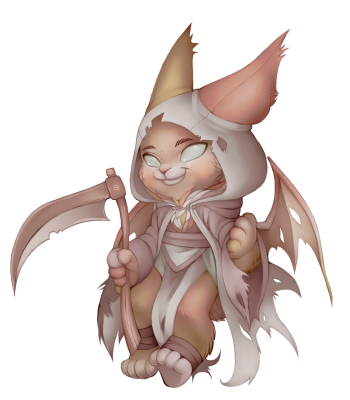 The leader and mother figure of the Coffee Buns, Espresso brought her family to Dragon's Maw Manor on a whim, in hopes of finding a good home.

The most kind hearted of the Coffee Buns, Espresso is known to put all others well being before her own and preserve their health at all costs. Her strong need to help is never discouraged by laws or regulations, and often that fact gets her in trouble, and may or may not be what prompted the family to move to Dragon's Maw Manor in the first place...

After they arrived, although shaken by well... everything about Dragon's Maw Manor, Espresso's luck slowly improved upon meeting the Wickerbeast herbalist, Tea, and then the rest of her family.

The Coffee Buns and the Liquor Beasts, both with something to offer the other, began at first, a tentative relationship in which each party offered to the other, a service they could not provide themselves.

Espresso was posed with keeping the Coffee Buns healthy first, and her various clients around the world, sated with Wickerbeast morphing potion and various draughts proven to improve warrior's lives whilst in battle. She soon realized as much good as she was doing with her family and the Wickerbeasts, they would not truly be accepted in Dragon's Maw Manor without a definite gesture that the Coffee Buns accepted every part of the Dragon's Maw culture, and so, with reluctance but the best intentions in mind, she allowed herself to become a reaper.