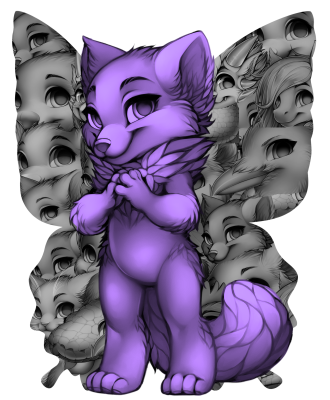 Tags: wings magic lavender heads lonely majestic solid lets see how many words i can put into this tag because why not looooooollll hmm not long enough yet i am going to keep going

Backstory said:
Majesty was once a normal fox. She had no wings, no lavender fur, she was just normal. One day, a strange cat visited her village. She welcomed them, and provided them with shelter. The Strange Cat revealed that they were trained in magic. Curious, Majesty Asked if they would teach her in it, The Strange Cat Agreed. After a while, The Strange Cat got bored of teaching Majesty. They then left the village, without any notice. Majesty, who had grown obsessed with the magic, followed The Strange Cat. Finally finding her, Majesty cursed her. Since Majesty hadn't fully been trained, the curse backfired. Her fur became a pale lavender, and she grew wings. Majesty had realized that The Strange Cat was gone. She herd shrieks behind her, The Strange Cat was trapped in her wings, still alive.

Since that day, everyone who has wronged her has been trapped in her wings.