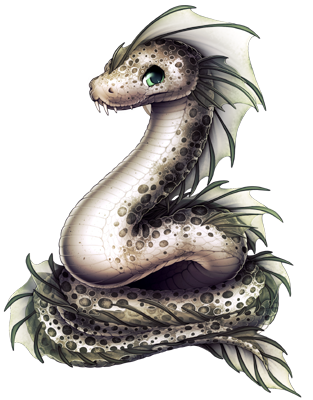 A more serpentine basilisk, Sandro has lost the clawed limbs of his kind from years of fighting. It's possible he might also be vampiric at this age, as he seems so... young, despite having a son and knows so much.

He's calm, deep-voiced, and armed with an awful lot of patience--as most murderers are. While it could be argued it's in a basilisk's nature to hunt and kill, he's been known to purposely go after families of creatures, and to... collect them in stone. While he doesn't use his petrifying stare often, this allows for his occasional uses to be extremely potent and dangerous.

He has a particular hatred for birds, especially the one whom injured him the worst--showing uncharacteristic bravery and resourcefulness for a normally timid species. He did exact some justice in devouring her mate, but he hardly considers it an even exchange for her irreparably damaging his arms.