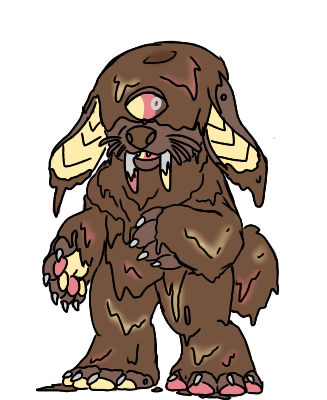 Sloof is, no doubt about it, a failed experiment gone horribly wrong. Fern was trying to find away to combine a living creature, preferably a villager as a test subject, with an inanimate object so they were one and then reverse the process so they were separate again. It was commonly seen in minipets, such as the aquaticat and two scoop sloth, so who's to say it couldn't be done with villagers? At the time Fern was looking for a test subject to try out her theories, Sloof-known as Floof at the time-was a broke kid just out of high school and nowhere to go. His parents had just kicked him out of the house because he did literally nothing productive, and they wouldn't let him back in unless he found a job. Floof ended up finding one of the posters Fern had hung around Dragonsmaw manor, and thinking the large reward would impress his parents, eagerly signed up for the position as lab rat without reading the fine print. This, of course, would later turn out to be a huge mistake.

When Floof showed up at Fern's door, he was smelly, dirty, and eating out of a carton of Neapolitan ice cream with his bare paws. Fern, however, wasn't about to turn away the only willing volunteer, and allowed Floof to act as a test subject-after forcing him to take a shower so his dusty aurora fur wouldn't reek quite as bad. When it was time for the test, Floof asked to be merged with his ice cream, and Fern obliged. But something went wrong, and after Floof turned into a horrible goopy monstrosity-which was to be expected-Fern found out in horror that the process couldn't be reversed.

Panicked, Fern trued everything she could to try and separate Floof from his ice cream, but it was no use. He was stuck as a monster permanently. Apologetic and remorseful for what she had done, Fern paid Floof twice the reward money she had originally offered and used quite a bit of her savings to buy Floof a house in Siilverflecked Village so that he may stay there until she could turn him, back to normal.
Ice cream goop critter!