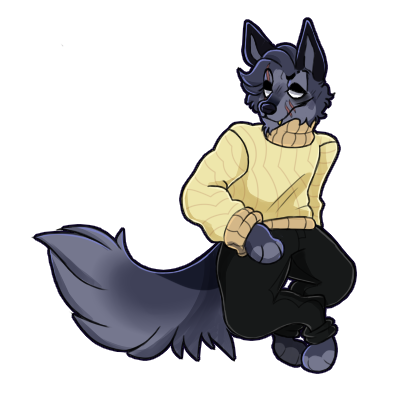 William is infected with Vampirism. Symptoms include craving blood, sensitivity to sunlight, an allergy to garlic, and changing into a bat after especially forceful sneezes. If they start to sparkle, immediately consume a Golden Apple to cure the infection.

WANTED
EITHER DEAD OR ALIVE

The crook terrorizing the streets of Britain since 1986
Feared by the townsfolk and his mafia gang, dodging the hands of justice for his crimes for so many years.


William may be described as dreadful, merciless, and ruthless by the locals but in reality he's just some depressed wolf guy that can't find his may in life who has a weird obsession with turtle neck sweaters and cry at the bartender counter while occasionally getting into bar fights.


Yeah, he might had committed many crimes, killed a man with his own thumb, and stolen candy from a baby but he can still be a good guy right?

His ego might be bigger than Jojo siwa's forehead and can be egocentric at times but he cherishes and loves his crew members as if they were his blood-related family.

There is not much known about William since he never really shares much about his personal history to anyone but if you got to know him and understand him a bit better you two might possibly be great buddy chum pal homie breadslices.


Proud owner of a persian cat by the name of Queen Elizabeth III
Adores her more than anything in the world.


BYE THIS BIO IS SO CRINGY AND ITS OUTDATED, I'LL UPDATE LATER