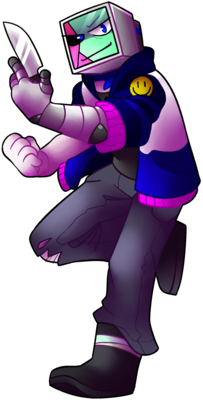 Jake is infected with Vampirism. Symptoms include craving blood, sensitivity to sunlight, an allergy to garlic, and changing into a bat after especially forceful sneezes. If they start to sparkle, immediately consume a Golden Apple to cure the infection.

personality: not on most people's "top 10 friends" lists. genuinely, he does mean well, as hard as that is to believe. incredibly abrasive and quick to set off- it's all a front to keep people away. don't take his insults too personally.
backstory: once, a much less bitter red-headed boy. living with his mother and brother, things quickly went downhill, leaving him alone. his best friend- at the time, was known for being a little out there. jake was an empty shell of a person, and he took advantage of that. all jake can remember is everything going dark, and then waking up like... this. he escaped from a lab under the cover of a wildfire to where he lives with luna, taiga, and beetle today.

likes: the color blue, knives (they're pretty), cats, his friends (though he won't admit it), pillows (and other various soft things), his sega saturn, and peaches
dislikes: rain (or any form of water, really), hospitals, enclosed spaces, kkat, being told what to do, being touched, and annoying people (what he considers annoying varies)

(yes i know his backstory is edgy and cringey just go with it 'k?)