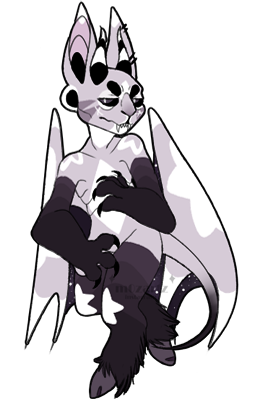 Azeroth is infected with Vampirism. Symptoms include craving blood, sensitivity to sunlight, an allergy to garlic, and changing into a bat after especially forceful sneezes. If they start to sparkle, immediately consume a Golden Apple to cure the infection.

Born from the cosmic stars of dream and despair, this Imp's main task is to consume and cause mischief within the dreams of mere mortals.
...But instead he'd rather slack off and contribute absolutely nothing to his species

- Might be defective
- About 5'3, shorter than the average Dream Imp
- Full of anger for no absolute reason
- He only speaks in Shakespearean
- His wing membrane resembles the night-sky
- Compared to the other Imps he is only a lesser and looked down upon by the upper-class
- Truly doesn't care, will fight anyone