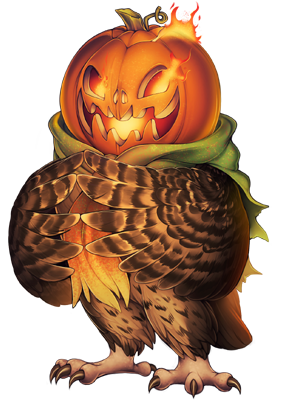 Pheonix Glowe is infected with Zombipathy. Eating brains relieves symptoms for a time, but comes with memories of the brain's former life. Your doctor recommends adding hot sauce for extra flavor, but a Golden Apple a day will send the Zombipathy away.

Hailing from Artemysterious' village,
Pheonix was once an ordinary, but somewhat reckless, owl. On most days he would sleep, and most nights he would hunt to his heart's content. On one night, however, he saw a peculiar looking ratty scurrying across the ground with three miniature ratties in tow. Their peculiar orange pigment somehow didn't set off any red flags, so he dropped from the branch of the old oak he called home and snatched the smallest ratty up in his class for a tasty snack. The mother ratty turned and with an odd, rattling squeak and a swish of a strange stick she held in her mouth, his head was so heavy and his balance was so thrown off he stopped and fell from the sky. He woke the next night with glorious flames blocking his vision. He sat with a start but the flames disappeared from view but the ratty mother spoke "My little ones were not for you, you will forever be a servant to the child you decided to eat, who was no more then a snack to you," with a tip of her hat and swish of her tail she left the shocked owl with a tiny little mouse who he named Squeaky for her tiny voice and continues to follow although he has no choice. Since then the tiny little mouse has been teaching him magic. Every lesson makes him all the wiser, and all the kinder, though he tries not to show it.