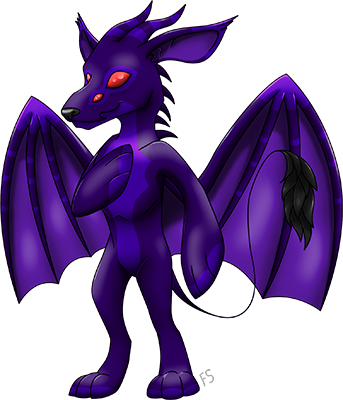 Personality: Coal is not as mischievous as most Imp Hounds, and can be quite the ambassador if met first. Testing his patience though is not recommended, since he will not hesitate to show his disproval.

Description: Imp Hounds are manifestations of pure magic from The Imperial Broodmother, not born like most creatures. Like their guardian, they find amusement in mischief, illusions, and trickery. They tend to be harmless unless provoked, their tricks meant to amuse them and slightly frustrate the victim, but to not do true harm. If someone abuses or harms an Imp Hound though...their memory does not fail them, and they work in packs and protect each other.

They all are created by The Imperial Broodmother, but are all unique and not truly related. Unlike their guardian, they are able to breed similar to mammals and have young, continuing the spread of their species.

Each Imp Hound has ears, horns, and a pattern unique to them, some even having special traits such as spines and wings. Some have even have rarer traits, and are seen as treasured and chosen ones by their creator, and are revered. It is said that their bodies are a reflection of their soul, and an expression of their inner selves.

They can be solitary or live in packs. The more their are, the more elaborate their schemes. If one is caught, you can have them play a trick on someone or do a favor in exchange for their freedom.

Imp Hounds are a Semi-Closed Species by Frost-Skyder and were once available here, but the page and lore will be revamped, so it is temporarily closed.