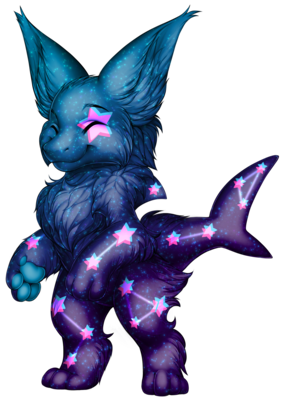 "O-of course I can feel emotion, why w-would I not? Sure, I may be made of magic and don't know where I came from, but why would that matter? I'm living, I'm breathing, I can think and hear and touch and taste. I am alive, and I can feel. Yes, I can even feel love."

The streets of Silverflecked Village as busy as always as you make your way along them. Old friends chatter and laugh, residents of the village go on with whatever business they must attend to that day while visitors observe all the different places there are to go. You have your own reasons for meandering about the village, but for now you are content to just be and walk. Unlike the night, nothing ever really happens during the day at Silverflecked Village, so what could go wrong?

Sure, there were some peculiar people that lived in the vicinity of the village, but most had already been accepted by the majority of the village's inhabitants, so they were not a threat. The only exception was Flesh the zombie rabbit, but that was clear to see why he was an outsider, an outcast-and plus, the rabbit had already made it clear he meant no threat. And, well, there was the Manokit.

You had yet to meet the mysterious Manokit you had heard about, as it was supposed to be elusive. But elusive or not, it's presence did not sit well with most of the villagers of Silverflecked Village, and thus most seem to keep their distance. You can sometimes hear mutters of the Manokit in snippets of others' conversations, talking about the mystery of it's origin and how unsettling it acts. Caught up in your thoughts, you noticed too late you were the only one walking on the streets now.

You hear an odd sound and then feel a presence behind you. Turning around reveals a smiling Manokit, it's pelt seeming to twinkle and fade, a black mist radiating off of it just beginning to dissipate. It laughs softly at your surprise, although you had no idea how it could see your face-it's eyes were shut tight. "A-are you old, o-or are you n-new?" it asked in a playful tone. "I c-cannot tell, for I-I am new as w-well." Okay, so the Manokit was a bit odd, but it didn't seem to be particularly dangerous either. It just stands there, awaiting some sort of response. What do you do? Do you continue on your way of contribute to the conversation? Talking to it would be the much less rude thing to do, and perhaps the safer option as well. After all, of the Manokit truly is bad news like everyone thinks, then you might not want to make it angry...

Yes, their name is 'Child', and is in fact the only thing they actually like to be called. 'Starscape' was added because it was part of their previous name, and it would sound weird for it to go after 'Child'.

One day, without warning, a mysterious Manokit showed up in the temple that lies not to far from Silverflecked Village-however, the residents of Silverflecked Village did not know this at the time, as the Manokit had been discovered close in proximity but not next to the temple, and it was not discovered until later. They were discovered by Cassie and Pacifica during one of the pair's expeditions. As they saw no danger in the mute Manokit, they decided to bring the strange creature back to Rain to decide what to do with them. Rain asked them who they were, where they came from-and the first and only word the Manokit said during that meaning was 'Child'. Seeing no harm in taking in the Manokit, Rain decided to let them live in the village. With some coaxing, the Manokit grew to trust them, and is now learning how to speak, although with a stutter.

Although they appear shy and bashful, Starscape Child seems to show no fear. They are friendly to all, and keep a smile on their face-even when mad, which is unsettling to say the least. They don't seem to age, and something seems wrong with their fur, as the starry pattern appears to move sometimes and the bigger stars occasionally seem to glitch out-most villagers in Silverflecked Village are wary of them. They have been known to appear in places only seconds after said space was empty, and have been seen phasing out of places, leading to the conclusion that they can somehow teleport. Their eyes are closed most, if not all of the time, but on the rare occasion they are open it can be seen that they glow such a bright light that their true color is unknown. When they cry, it is black ichor that disappears about a day later-and even when they cry their unsettling smile never fades.

When Rain first accepted them into the village and introduced them to everyone, Blue had dubbed them 'Nova Starscape', a name widely accepted by the village. However, the Manokit preferred to be called 'Child', and was annoyed by Blue's 'unnecessary title' for them. To get Blue to stop calling them this, the Manokit stole all of his plants and threatened to burn his cottage. Blue made a compromise with the name 'Starscape Child', which seemed to work for the Manokit. The name 'Nova' is now only a rare nickname. Rain is pretty sure the Manokit was joking, as they are normally very mild mannered, but Blue likes to keep his distance now.

Relationships:
(friends, enemies, mentors or students, acquaintances and the like)
None so far! If you'd like one of your characters/villagers to be listed here, just ask! ^^

Notable Village Relationships:
Rain: Starscape Child respects Rain as their leader and considers her a good friend. They like to hang around her when she's working and watch what she's doing, as they are very curious. Starscape Child wishes to become closer to Rain.