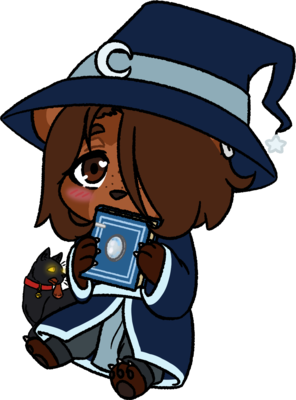 Eiliana is infected with Vampirism. Symptoms include craving blood, sensitivity to sunlight, an allergy to garlic, and changing into a bat after especially forceful sneezes. If they start to sparkle, immediately consume a Golden Apple to cure the infection.

Need New Paintie
Very close friends with a certain hybrid, they are basically family
A witch who specializes in water magic, which includes healing and purifying, and cryokynesis when needed
The moon seems to influence her powers

She recently became a witch after a bit too much demon blood in her body awoke her dormant magic powers
It seems like she had magic users in her father's family ancestors, it may be why they have strange healing powers

Her little friend is named after her late grandfather
She has a matagot familiar named Noir who she took in after finding him wounded at a crossroad
She has some other friends too, a white snake spirit called Kenta curled around her neck, a bear spirit who usually stays in her necklace, called Arzhela, a guardian black dog called Ciar/Blacky, two crows called Dougal and Yuu, and a strange goo monster called Shade because it likes staying hidden in her shadow
She also recently befriended a little rat named Fred who has a broken tail but is still adorable