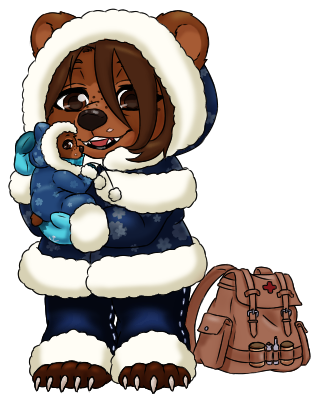 Looking for CSS
Paintie by me

Fursona
Any pronouns are fine

Mama bear, also called Kumama by her friends
Don't hesitate to call her Mama, Mom or anything similar, she loves it
You're all "sweetie", "sweetheart" or "dear" in her eyes even if she doesn't say it
She will hug the heck out of you if you're feeling bad
She has no problem spending hours in the kitchen baking if it's to see the smile on people's face when they eat what she made
Despite being very motherly, she can actually be childish sometimes

She's kind, gentle, warm, caring, loving and mellow, but really protective of her loved ones
She's very peaceful and avoids conflicts; she never truly gets angry, unless someone she cares about is hurt or threatened (mama bear)
Her voice is soft, warm and quiet
She loves making puns and jokes
She's sleepy most of the time and will quickly fall asleep if she's comfortable

She's autistic but you usually could never tell just from talking to her unless in specific circumstances (which makes it harder than you imagine)
Communicating verbally and expressing herself properly is often hard for her however and she finds it easier to write and usually needs pictures to express how she feels due to being unable to find words
She often replies with just "Mm" when she doesn't know what to say but does want to let you know she's not ignoring you
When she's not in a mood where she wants to talk she'll simply use different huffs, sighs or short hums depending on the mood she's in or if the answer is positive or negative
You'll need to learn to know her to understand what each means because it's not something she can explain herself!

She has a sweet tooth and loves little cakes and pastries
Mayor Polaria's Snowy Night Beignets are her favorite treat so she always looks forward to the Snow Festival each year
She loves honey, which isn't surprising for a bear, and loves drinking warm milk with honey in it

She loves her little cub Art, nicknamed Artie, more than anything, who she found shortly after his birth and took him in as her own
He doesn't like being away from her so she has to always hold him or use something to keep him against her but she doesn't mind in the slightest
Hunfrid and Shun are a young black bear and polar bear respectively. Despite being different in a lot of ways they're inseparable and do everything together, even though Eli adopted them a few years apart
Hunfrid was the first cub Eli found almost 4 years ago, hiding high up in a tree, and was taken in as a younger brother at first, but not long after adopting Art in fall last year and him accidentally calling Eli "Mom" instead of "Sis" once, their relationship changed and she adopted him as her son instead
Shun was found somewhere on the frozen sea in winter last year after losing her mother when they "were in the water and everything became black white and red". She first took care of her then adopted her
The triplets Ethan, Elian and Eden are three little brown bears, Ethan the firstborn is quite rambunctious and always wants to play fight, Elian the secondborn is calmer and does his best to keep his brother in check, and Eden the youngest is very quiet and smaller than his brothers, being the runt of the litter, but his brothers cherish him
She found the three of them alone in a forest in the middle of the winter last year and took them in, and immediately adopted them as her own sons
Ursula is her oldest daughter, she's an almost completely nonverbal autistic (she's not mute); she never says a word simply by choice. She might not be good at expressing emotions but she loves her mother and family dearly. Eli found her alone last summer and quickly noticed they were similar
She met them in the order of Hunfrid, Art, the triplets, Shun and Ursula

She's an explorer and a doctor and she has mastered all medicines to be able to heal anyone who might need it, no matter where they come from
She always carries around a fur blanket in case she finds someone who needs to be warmed up
She also used to be a herbalist but let Iris take her place when she saw how much she wanted to be one herself

She found Arcturus while exploring and brought him back with her
He's very fluffy and enjoys cuddling, he's a gentle giant
He always sleeps in Eli's room and sometimes climbs on her bed like a big puppy
She usually rides on his back while exploring and travelling to heal others, and he enjoys being able to help like that

Hokuto and Ashura are like older siblings to her and she loves them dearly, her cubs think they're number one uncle and aunt