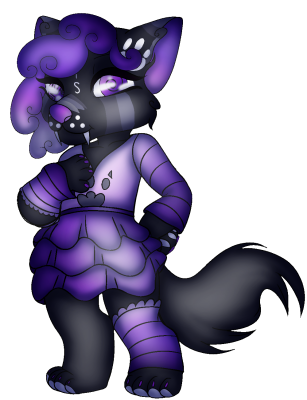 IrisPaw is infected with Zombipathy. Eating brains relieves symptoms for a time, but comes with memories of the brain's former life. Your doctor recommends adding hot sauce for extra flavor, but a Golden Apple a day will send the Zombipathy away.


Born in as a devoted Riverclan cat under the name of Grapepaw, She's sleek black she-cat that has been give the gift of endless life however she's dies by drownings and becomes reborn into multiple different lives receiving unique markings on her face upon her first death. Her first life she was named Grapekit, she was raised into an apprentice. However, an omen spoke of how "A kit of blue will spring new life." At first no cat knew who the omen was about until Grapekit was born as an only kit with blue eyes. A few weeks before being apprenticed. she wandered off and dug a hole finding a needed stream of water. After being apprentice, a new omen came and every cat understood it was about Grapepaw as no other cat had a fruit based name. "A loss of fruit will be a gain for others." During a patrol around Riverclan's territory, Grapepaw saves a young wolf cub that was drowning in a stream but wasn't able to climb back out. This is Grapepaw's first death. Upon her second life She's name Pawzie due to her unusual paw print markings. Her mother is a rouge. She grows into a young adult and helps a group of rouges learn how to hunt and gather herbs and leads them to a better home but she dies after falling into a lake. During her third life, she's reborn as a wolf name Iris. Her mother abandons her because of her unusual markings and Purple eyes. She's gets adopted by a roaming wolf pack who raise her as their own. after becoming an adult, Iris leaves and follow's a moving purple light that leads her to a group of sickly wolves. She helps the wolfs to survive winter and leads them on a journey to find a better territory. After over 1 year of moving place to place they come across a big open area hidden by huge trees. They choose to stay here because of the cave and abundance of prey. She becomes close with one of the wolves here. She teaches them everything she can to help their lives improve. Iris lives with them for 3 more years before feeling off. She has and urge to jump in the nearby lake. She says her goodbyes as she believes there's no other choice and she will drowned either way. The wolf is upset but understands and wish's to see her again someday. Iris dies by choice. Her 4rth life she is a cat once again but all of her strange markings and eye color stay. Unsure of what she's meant to do, she endlessly roams looking for the purple light. A flood occurs in her area but she doesn't drowned. She sees the light once more and runs to a yellow/red tom yowling for help. A group of cats have banned together to survive the flood and are staying in a tipped over building. A female cat is giving birth and needs help. Iris helps with the delivery by collecting herbs she remembers and the yellow tom leads his friend through it. Three kittens are born in healthy condition despite all the water. Iris sees the purple light surrounding the yellow tom. Confused, Iris believes she must protect this tom. She follows the group and does anything she can to help. The yellow tom collects other cats that have been left behind or lost during the flood and leads them away from the flooded area. Iris takes over after realizing she no longer ages but everyone else does. The yellow tom and others age normally as years pass. They end up in a familiar place to Iris. The wolf pack, now thriving, greets the cats and the wolf friend of Iris recognizes her despite being a cat. The entire pack of wolves and group of cats appear surrounded by purple light. Iris smiles as she sees the group of rouge from when she was young walk towards them from the other side. The cats and wolves greet each other as Iris's vision begins to fade. The wolf friend recognized the look on Iris and says his goodbyes once again. He doesn't want her to leave and tells her to find him in their next life. Iris looked shocked as the wolf's eyes fade along side her. Iris wakes up in the middle of a packed city. Everyone looks strange, animals that walk on two legs and wear human fur? Her head is spinning and a red and blue flashing car pulls up by her. They try speaking but she doesn't understand. The dog covers her in his blue jacket and takes her inside of the car. Iris panics the entire ride until she's greeted by another cat. The cat asks her a bunch of questions and calls her a 'Feral cat.' She is brought to a building to live with a bunch of other animals who all don't speak like the others from before. A cat in a white outfit shows Iris her temporary home and teaches her about this new world. Iris ends up being a roommate to a blind cat and a tall wolf. She's now able to control her powers and no longer becomes reborn or dies to teleport to where she's needed. She just needs to be underwater to activate it. Every time it happens now, she comes back to this strange anthropomorphic world. Iris has never found her wolf.