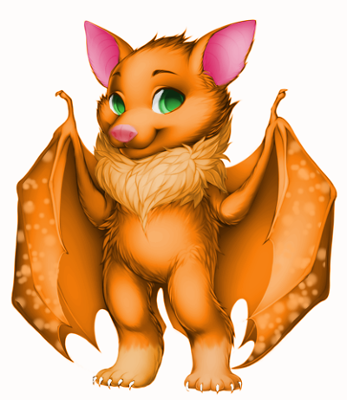 Batilda is a mild-mannered lady living in the prime of her life. She believes strongly in the importance of politeness, especially when dealing with strangers. Her hobbies include caring for plants, knitting (difficult, considering her limb situation, but she manages) and teaching others. She is known for her ability to rehabilitate the toughest people, and has currently taken a young cat named Pixie Stick under her wing. Batilda is seen as the 'mom friend' in her social group, and she's secretly very proud of the label.

It's not very hard to befriend this ginger, green-eyed bat, although her demeanor may come off as somewhat shy. Within a few conversations, she'll be talking to you like you're an old friend! (Then again... Have you seen how she talks to her old friends? She'll talk your ear off with old-lady style gossip about the crazy new knitting patterns those youngins are coming up with these days... Ah, they grow up so fast...)

Really, though, Batilda has always been mature for her age. Though she's middle age - only halfway through her life - she treats every day as though it may be her last. You will often find her savoring the sunset from her luscious garden, As she basks in the flowers, being careful not to crush them, she stretches out her wings and lets the dying rays of sunlight drip down them until they collect in puddles on the ground, soaking into the waiting earth below.