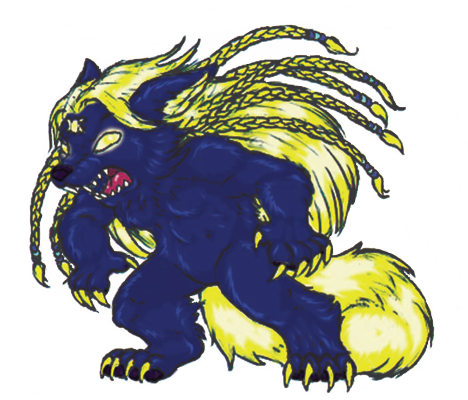 Lunarwolf_MoonPhaser is infected with Lycanthropy. Changes into a beastly monster after exposure to moonlight or especially frustrating board games. Howling at the moon relieves the symptoms for a little while, but use a Golden Apple for best results.

500 years ago... in a galaxy we'd only b'gun ta imagine what the fruits of 'The Furriveerssse-- eerse--- ersse...' would bear fruit of... The Triplemoon Lunargoddess sent forth an avatar, ..

Unfortunately... her avatar, it's pure essence inta the blazin' meteroite the moon tossed to be her messager crashed nearby in the woods to the apartment complex of a young nerd, He went out to investigate...

Arriving at the sight... he gazed upon the eerily brightened furrows of even the surrounding contrails of the impact site occured.

Enraptured at the unearthly site, the gawky young artist leans in haphazardly closer only to be rocked violently backwards by the impact of an eruption of super-heated lunar lava. Eternally marking and bonding upon contact with his forehead and branding him with his goddess' gifts.

But as with all gifts, the end-resulting being that emerged forth from this alien contact... as crazy as it all sounds... was sent here with the sole purpose... ta make other critters groan an laugh about the craziness of how some'a the things y'all do an say 'round'im are as crazy to him as how he seems to you! LOL

Make no mistake, Although Lunarwolf's social demeanor is as often times as unpredictible as his change-able nature, he is still an avatar of a goddess and because he has such a love/hate relationship in his worship of her his abilities and their effects tend to be as wildly randomized and crazy as he himself!

Firstly, Lunarwolf possesses all the attributes inherent of all werewolves. Shapeshifting from human to feral wolf to the anthro hybrid were form. However, as his origins are also half-stemmed from the moon and it's lunar attributes he gains aditional strengths and weaknesses. For example, on the moon he posseses the normal weight/strength to suit that enviroment but on earth his strength, mass and invunerability are highly increased.

Lunarwolf's shape-shifting abilities are broadened to include various other species, either in anthro or feral form and he gains any inherent abilities of any said species he shape-shifts into ie: fish/underwater breathing, birds/flying.

Lunarwolf also possesses (current limits unknown) degrees of control over both light and darkness and is capable of using these abilities to further 'dazzle' opponents with his shape-shifting abilities.

One of the duely-noted drawbacks of his shape-shiftings abilities is that the forms he assumes will always have the tell-tale colorations of whatever his own fur/hair color in during the times of his shifted shape.

But the ability Lunarwolf possesses that makes him a 'wildcard' in group play is that his abilities or rather the effects both he and both allies as well as opponents tend to have chaotic, randomized effects on all targets! This particular ability, The Karmic Chaosspin Attack. is thankfully limited to 1 complete round of all other allies/opponents until Lunarwolf's next turn... and he himself is very cautious of using this ability since such random effects can seriously harm or even 'kill' allies as well as opponents... including himself!

His only 'saving grace' being that as a werewolf avatar to a Goddess... he will eventually be reformed.