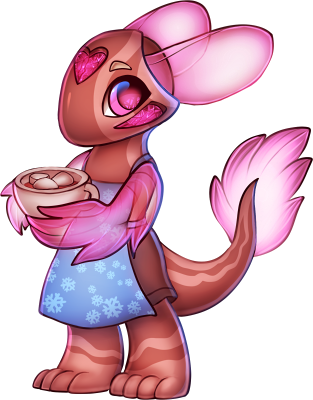 A chef who hails from Tiger Eye Peak! Was born in Oceandome, but was orphaned when her parents took a sightseeing vacation to TEP and mysterious disappeared. With her parents presumably dead, young Freya was sent off to the orphanage. Being an unusual fish-like species with a tiny mouth and small voice, not to mention extremely susceptible to the cold, it was no wonder why Freya was a target amongst her peers. She suffered horrible bullying, and often was hungry because of her inability to consume larger foods. However, a ray of hope shone upon Freya when she was adopted by a family of cats! So she grew up in the mountains with her newfound living family, who gave her warm coats and small candies and hot chocolate that she could sip through a straw. Freya, unable to leave the house or go outside much, decided to become a cook! And there her skills for cooking and baking were unearthed and flourished with the time they had to grow, and soon Freya had mastered most all her family's most favored recipes, even improving upon their hot chocolate! When she was old enough, Freya made the decision to go out and explore the world, and bit her adopted family goodbye with lots of hugs, tears, and a promise to return. Setting off for warmer weather and a prosperous future, Freya set her sights upon Dragonsmaw Manor to begin her journey as renowned baker and chef. However, she was crestfallen to find out that, upon her arrival, Dragonsmaw Manor already had plenty of popular bakeries and famous chefs to make room for one more. However, when one of the citizens of Silverflecked Village, (their name here), visited Dragonsmaw Manor, the two crossed paths a started a conversation. They invited Freya to Silverflecked Village, in which she happily agreed. Almost as soon as she got there, Freya set up a bakery and became an immediate tourist attraction due to her delectable foods and delightful desserts! While at Silverflecked Village, Freya met a peculiar fellow by the name of Etavius Flysotrix. Perhaps it's just a coincidence that their names have opposite initials... or maybe fate?