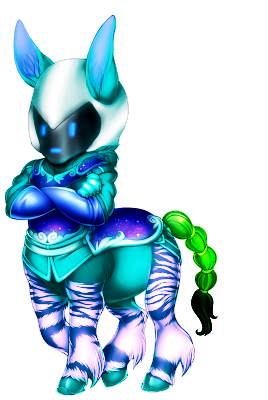 Cecilia (probably butchering that name) was a product of passion, the spawn of a project worked on for years. She was created by a enthusiastic scientist who wished to create a creature similar to Primagens, but much more fitting for carrying heavy weight and more resistant to attacks by monsters. Giving her these traits was the easy part, but making her fur soft and huggable as well as creating a sentient AI was much more difficult. The scientist spend months designing her, and years teaching her to think for herself. Eventually, after countless puzzles, studies on media, and conversations with those who weren't too scared to her, Cecilia was complete. But the stress of the project had taken a toll on the scientists. He was enthralled that Cecilia was complete, of course, but he became very worn and tired. So, so tired. While walking through a forest, they were attacked by a group of monsters, and the scientist was gravely injured. Cecilia fought the monsters with everything she had to save him, somehow managing to chase them away. But the scientist was losing blood. Cecilia picked up his lifeless, limp body and ran towards the nearest village, which happened to be Silverflecked Village. She handed the now unconscious scientist to Fern, hoping that she could heal him and make him better again. He never woke up.