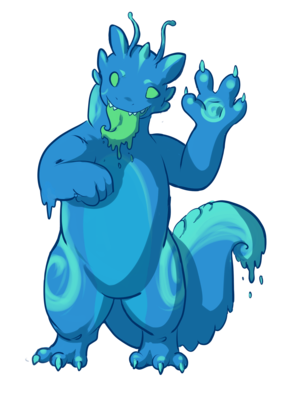 Skypop is a Slimander.
He is slightly mischievous due to his rather constant curiosity, as well as being very social. More often than not picking up those far smaller than himself to get a closer look, or simply to hug them. Much to the drippy dismay of those he does.
He has a tendency to steal the occasional dropped or miscellaneous object from those around him. Due to their interesting genetic make up, those he is with have discovered he can store items he wants to keep within his inner slime. Although whether or not he sees said item as food or not when he does so is another question entirely.
Having been around a variety of other creatures, some of whom are incapable of spoken speech like himself, he's picked up the ability to sign over time. Primarily he will use that and of course other forms of body language, though depending on mood or situation he may add in a variety of other simpler sounds. (Squeaks, perhaps a growl, so on.)