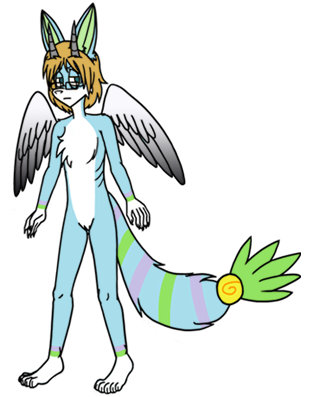 Srs is stoical and aloof. He identifies as male to get away from his past female self, ashamed of the person he used to be. Works as a starving artist, and somehow makes enough money to live on his own.

He lives in a cottage surrounded by acres of woods with a roommate, Medula. Currently, they're dating. Quotes is their neighbor, and he visits them often.

Though Srs used to wander the earth, he really hails from the skies given that his species originate from a heavenly realm. Adrian O'Brien is a false name, with Sirius Prose Takeran being the true title he was given at birth.

As a demigod, Srs has celtic heritage. In human form, that translates to him being irish, hence the surname "O'Brien". Speaks with no accent, if you don't count that the default language winged/horned deities speak is literally just a bastardized version of "lorem ipsum" (I kid you not).

Like the majority of his kind, Srs is trained in combat and has years of experience. He is an experienced tactician and trying to rob him or even challenging him to battle is not wise. Srs uses an electrified trident as a weapon, along with his tail orb, which changes colors and patterns depending on his mood. He can also assume a human form which is shown in his reference.

To summon Srs, you must perform this ritual: