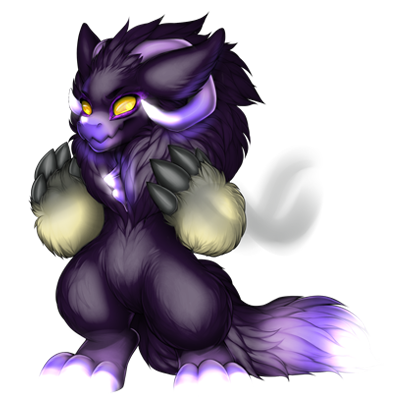 Guarda is infected with Lycanthropy. Changes into a beastly monster after exposure to moonlight or especially frustrating board games. Howling at the moon relieves the symptoms for a little while, but use a Golden Apple for best results.

Guarda itself is a strange creature with no known shape or form, none that seems to have been seen by anyone, anyway.

Guarda is a being that inhabits the host and gives them enhanced abilities and power, what it looks like depends entirely on its host, Its gender and current physical form too rely on the user. It takes the form most suitable, and it usually takes that of whatever it sees fit with what it finds within the being. At times what can happen is the being's appearance is drastically changed, or just slightly in color. Telling traits of Guarda are a strange smoke-like tendrils that come off the host's hands or arms, a crystal-like formation on their chest, glowing shadows under the eye that form a trail to the ears, and of course, the change in either fur or skin color.

With a will of its own, and its own thoughts, it can take over the host's movements and cause the current user to fall into a sort of deep sleep state while it takes over its consciousness as it sees fit.

Guarda comes from a distant world long forgotten in the vast darkness of space where it was once one of several beings that coexisted with their current hosts as guardians of a powerful energy.

Painte by me, colors based off one of my characters.