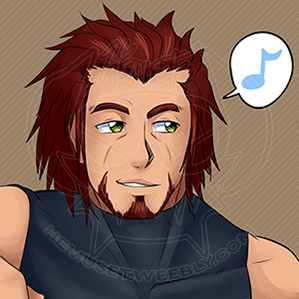 ╭━━━━━━━━━━━━━━━━━━━━━━━━━━━━━━━━━━━━━━━━━━━╮
-==SIGNIFICANT OTHER==--
Ramla
You'd be surprised to find that out of the two, Arlos tends to be the one that gets easily flustered. Maybe it's due to the deep affection he has for Ramla, or because he's not used to being so closely attracted to someone prior to this relationship. Regardless, he is usually seen blushing at Ramla's antics, even when he's working in his blacksmithing job.

She's one of the select few who has seen his mischievous side, as he often will tease or play tricks on her, but not while in the company of anyone outside of the family. Unlike Ramla, Arlos is a much more reserved person.

He met her after he had been rescued by her from bandits in her home land, a massive desert. When he fell for her he's not too sure, but he attributes it partially to how well she can manage herself in combat. Asking him to divulge with an answer just gets him flustered and will usually be met with an obviously forced frown, and turning away from the questioning party.

--==PERSONALITY==--
Arlos comes off as intimidating and cold at first, but it is all a tough exterior that hides a kind and mild tempered heart. Despite acting like he’s the least bit eager to help those seeking aid, he will nevertheless lend a hand to someone he believes is a good person. He’s a pretty good judge of character, and has learned to do so thanks to past events as a young adult.

He is slow to jump the gun, and keeps his emotions under a level of control he could only gain through rigorous training. His level-headed ways hide an extremely short temper, which can sometimes slip through into his expressions. He may show slight annoyance to a frown, roll his eyes, or negatively react to someone if he gets agitated enough. He knows it may be dangerous for others if he were to go into a blind rage, so in order to protect others, he tries his best to find outlets for his anger, or meditate on it until it goes away. Situations that manage to get under his skin will be the only thing that get him to let that grip he has on himself lessen slightly.

While carrying an attitude of calm indifference, or a reserved silent and cold man, Arlos can easily sympathize, and empathize with others. This leads him to usually go out of his way to help someone in trouble, and making sure they are alright. Although he does get along with kids, and will sometimes stop to play with them a bit, he wouldn’t exactly be sure of what to do with one, let alone take care of one.