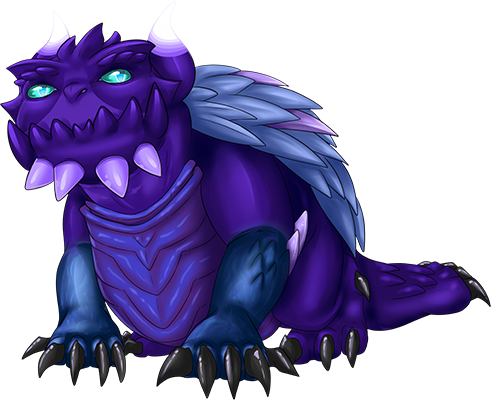 Dokugora is infected with Vampirism. Symptoms include craving blood, sensitivity to sunlight, an allergy to garlic, and changing into a bat after especially forceful sneezes. If they start to sparkle, immediately consume a Golden Apple to cure the infection.

What's that purple monster!? Why, It's my mascot!

" Due to its size, it is considered an Elder Dragon. It prefers to sleep, and won't bother anyone unless they step into its territory with very obvious harmful intent. The crystals that grow on its forelegs and on its back are very valuable."

No one knows what the Dokugora really eats, it's been seen lumbering near the shore trying to get itself some seafood, eating some vegetation, and eating crystals as well! The occasional pestering monster meets an unfortunate end being poisoned by the giant creature and then devoured once it has succumbed to it. While Dokugora seems to be an omnivore, it seems much too slow to catch prey easily, yet somehow it always manages to find something to eat.
Watching Dokugora drink from bodies of water is comical, having to dunk its lower jaw into the water as it tries to drink past its teeth to avoid choking on debris. It will then lumber away, leaving a mess of water in its wake as it drips off the Elder Dragon's massive body.

Whether or not there are many Dokugora is unknown, but they can be found sleeping deep within massive caverns that the Elder Dragon seems to carve out itself with hot beams of magma from its mouth, or by clawing its way through with its hard claws.

Dokugora seems to go out of its way to avoid causing too much damage, and avoids human settlements in general. When attacked, it will initially try to flee, but once angered, its crystals will grow bright red, and it will become highly aggressive.

Dokugora's designed by me, and a loving nod to the Monster Hunter series.

Dokugora loves food, any food gifted to it will be promptly devoured.