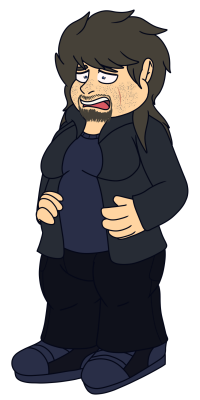 Revel is infected with Lycanthropy. Changes into a beastly monster after exposure to moonlight or especially frustrating board games. Howling at the moon relieves the symptoms for a little while, but use a Golden Apple for best results. Revel Alexander Arola is "The Destroyer" in the Dankiglic Prophecy.

Revel is mentioned a lot in the story and only seen in the Prologue and Chapter 10 in person. He, however, is seen in his eronigo form, Retro, throughout the story. Revel ended up being possessed by the substances of Kirai and ended up changing his form into a goat makoitta. Because of the possession, he couldn't control himself as much and ended up hurting his friends as a result of it, including Davin. Despite having little to no control of himself, he is still extremely disappointed himself for getting himself into this mess.

Revel is the main protagonist of the Real World Arc in Tale of the Dankiglic: Visions. Around this time, Revel graduated from high school going to college in a few months. However, he is still extremely depressed since the incident. Despite resetting to the beginning of TotD, he and Carmen remembers what happened. Some things were still the same in the new timeline, however: Davin still has scars and aggressive, Sylas is still after Revel, and he still has some remains of Kirai within his soul. He eventually tells Davin what he remembers, leading to Davin almost killing him. At this time as well, Sylas is joined by the rebellious Lyoroo. The duo chase him down until Revel makes his grand escape. Later on, it's revealed the lyoroo betrays Sylas so he could gain powers from him. Sylas then tries to find Revel to explain that he needs the Kirai substances from him to save his friend and that the lyoroo was a megalomaniac. There, they joined forces to stop him for good. After the lyoroo's death, Davin is freed from his somewhat possession as well and decides that he feels shameful for almost killing him.
═══════════════════════════
Design inspirations:
TBA
═══════════════════════════