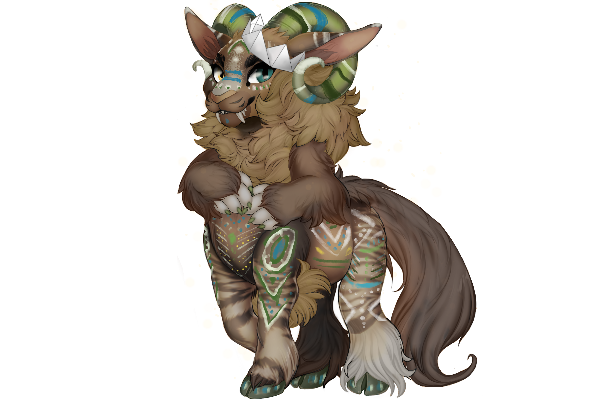 Gādian is a Mix-breed Saggitari and a Leodon, coming from the Outside world. She stumbled across Furvilla in her travels after unsuccessfully trying to reach land, she almost drowned in the great sea below Quetzal Palace. She woke up in a small cottage nested deep within the cloud forest with a kind little green gem raptor scuttling around the tiny house. Though Gādian does not know who saved her, as the gem raptor stated she found Gādian out cold leaning against a tree soaking wet in Quetzal Palace. Gādian hasn't thought of leaving and plans to defend her new home with the people that saved her.
The crown she wears was crafted by Gādian herself (though it doesn't look all that great, she isn't a crafter, we still love her) and she wears it around everywhere.
Ham-Ham, her buddy, she found while tearing down monsters. After the tiny winged fox had been swallowed whole by a cloud shifter, Gādian cut it down and grabbed the tiny fox from the beast's ashes. Now the little fox scuttles around Quetzal Palace giving people random gifts, but always returns home to Gādian.